The temperature of the entire container (inside of both compartments and the walls of the container) must be identical for the initial stage of experiment. For simplicity it can be considered that starting temperature is 30 ºC as in fig.1. 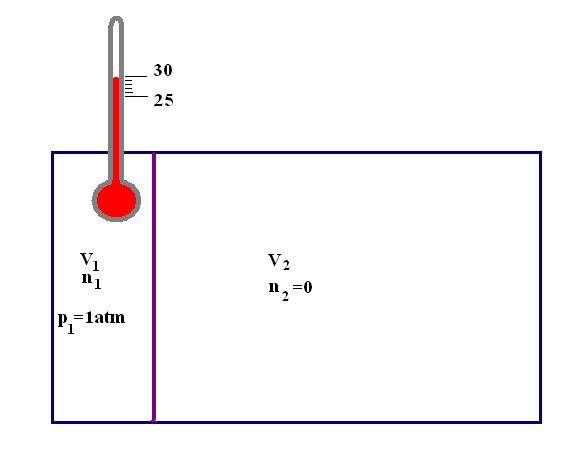 The experiment is very simple and consists in removal of internal wall followed by a temperature monitoring for a certain period of time.

When the internal wall is removed, the ideal gas found in the first compartment expands into entire volume of container. A decreased temperature of gas is measured after internal wall removal. The size of effect depends of a lot of factors and these factors or their influences are not important for the purpose of experiment. For simplicity, let’s suppose that final temperature measured by thermometer is 25 ºC as in fig. 2. 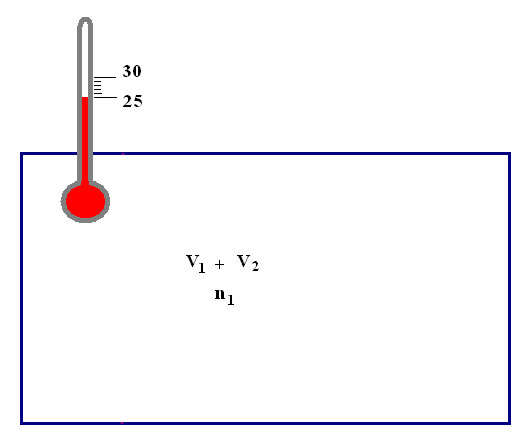 Why the actual kinetic theory of gases is a incorect …..

It is necessary to have only a little bit ,,common sense” in order to observe the incompatibility between actual prediction of kinetic molecular theory and the comportment of a gas in a range where actual KMT predict its ideal comportment. Of course, a non ideal comportment does not improve the situation. A wrong theory can’t become correct only because adopts a new absurdity as an axiom.

Let’s analyze in detail what’s happen in the container when the intermediate wall is removed. According to actual KMT, the atoms of helium existent in the first compartment at a pressure of 1 atm posses a kinetic energy equal with:

where m is the mass of He atom, v is the medium velocity of He atom, T the temperature, and k is Boltzmann constant.

When the inner wall is removed, part of He molecules which an instant before were moving toward this wall, does not encounter this obstacle and they are traveling in straight line in the second container until they meet the walls of the second container and after another elastic collisions are turned back as in fig. 3. The fundamental question  is: why such atoms change their energies in order to decrease the temperature of gas as is experimentally measured?

Of course there are other explanations more domestic in the frame of actual KMT.

What happened if the temperature is defined like the probability of collision and not like the energy carried by molecules? In this case, when the volume is expanded, of course there is a decrease of temperature as observed experimentally… but in this case the kinetic molecular theory must be revised so drastically that does not worth to be discussed here….

Of course in some minds everything is possible. But the consequences should be more then disastrous and again does not worth to be presented at all.

A similar experiment can be proposed to the inverse phenomena, more precisely gas compression and in that case the energy is released…

Again the experiment has a striking simplicity.

Let’s consider an insulated cylinder having a quantity of gas inside, for simplicity helium, and a piston able to exert a compression over this gas as in fig. 4. It can be considered a starting pressure equal with 1 atm and an initial temperature equal with 25ºC. 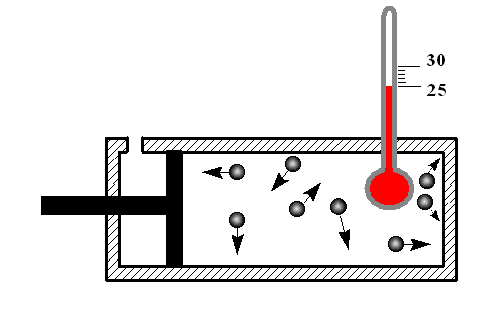 The pressure is increased slowly inside cylinder, moving the piston with a speed of few mm/s. The temperature (eventually the piston volume) is monitored during this slow compression. When pressure inside cylinder is hundred times greater then initial one the movement of piston stops and the monitoring of temperature continue for another few tenths of minutes.

As gas is compressed, simultaneously with gas volume decrease, there is an increase of temperature too.

For the simplicity of experiment let’s consider that final temperature is 30 ºC as in fig. 5. 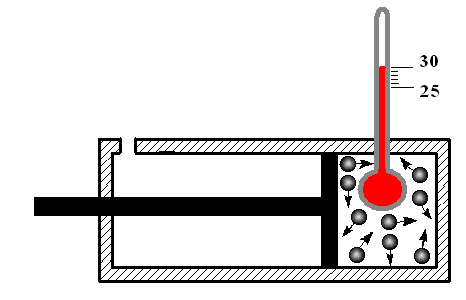 Of course in this case, at 100 atm every physicist will argue that a gas does not have an ideal comportment. The main point of the experiment is not to establish the ideal of non ideal comportment,  but the reason for the gas temperature modification.

In a more sophisticated laboratory the same experiment can be performed in an interval of pressure where the gas has an ideal comportment and the result is the same: during compression, the temperature of compressed gas increases, independent on its ideal or non ideal comportment.

Can KMT or actual physics explain this increase of temperature for a compressed gas?

The answer is definitely no and the explanation is very simple: The actual physics and actual physicists have no clue about what’s happened at atomic level. They are talking from imagination.

At a piston speed of few mm/sec, and molecules speed of hundreds and even thousands of meters per second, it can be approximated that piston is stationary during collision. Therefore fast moving molecules will collide elastically with piston and cylinder walls and the energy of molecules remain constant after collision.

Even the case when a momentum of piston is transferred to the gas molecules (inelastic collision) are taken into consideration, the results can explain only in part the experimental reality. Of course a,,inelastic collision” rise other problems for the model and such discussion will be made extensively in the book.

In the book, the new proposed model of temperature concept renounce at the kinetic molecular theory and to the ,,concept of classical collision”.

More experiments and more about subject in the book….