EXPERIMENT 2.4 Daniell cell and salt bridge
Experimental part
Materials and procedure for the experiment:
 Cu and Zn metals strips;
 CuSO4 and ZnSO4 as 1M solutions;
 Agar Agar
Few different salt bridges are made after the following recipe:
 3 g of agar-agar are boiled in 250 ml deionised water.
The entire volume is divided in four and to every quarter is added:
1) NaOH 0,1M and higher concentrations - aprox. 5 M
2) CaCl2 about 0.1 g and CaCl2 about 2 g
In this way four different salt bridges are made. Four tubes of PVC (or another material) are curved in a U shape and filled with up presented solution. At the ends of the tube some glass or cotton wool is fitted in order to have a good contact between bridge and solution. The tubes are leaved to cool down and after the gel apparition, the bridge is ready.
The 4th bridge is a repetition of 3rd bridge, but instead of glass wool at the ends of the tube, 2 pieces of graphite recovered from some old carbon zinc battery are used.
The experiment is designed to check the movement of the ions from bridge to solution.
First, the diluted CaCl2 bridge is used. The potential registered is about 1,1 V. In solution there is no confirmation of a precipitate apparition after 2 hour of working with multimeter connected to it and electrodes in short circuit
Another cell is formed with concentrated CaCl2 solution sequestered into agar agar. The potential registered is about 1,1 V. In solution there is no confirmation of a precipitate apparition after 2 hours of cell working.
The third cell is formed with a NaOH sequestered into agar agar as salt bridge. Before bridge insertion and after 2 hours of cell working the pH is measured with pH paper or with a pH meter. Before bridge insertion the pH of ZnSO4 was approx 5 and the pH of CuSO4 was about 9. After two hours the same values were registered.
The 4th cell is formed with a bridge having a “mixed” conduction. The graphite is an electronic conductor and the gel is an ionic conductor (according to actual classification). The contact between bridge and CuSO4 and ZnSO4 solutions is made only by graphite portion of the bridge. The potential registered is about 0,8 V.
A “formal Daniel cell” is formed using a Zn electrode immersed in a ZnSO4 1M solution and on the other hand a Cu electrode immersed in a CuSO4 solution. The solutions are connected with one of up presented salt bridge. CaCl2 was preferred instead of KCl due to the simplicity of Ca and Cl ions detection in an analytical way.
Before cell formation the mass of Cu and Zn electrodes was measured with an analytical balance. Once the cell formed, the difference of potential is measured and this is 1,070 V. Further, in order to speed up the processes from electrodes, the Zn and Cu electrodes are connected by a metallic wire (short circuit) as in fig. 2.6.
After 1 day of Daniel cell working, the metallic wire is disconnected and the difference of potential is again measured. The value found for the “Daniel cell” is the same 1,07 V, like before short circuit. 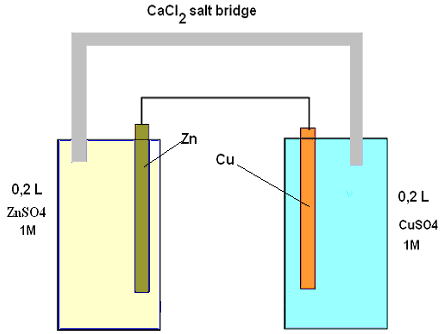 The electrodes are again connected in short circuit and after 3 days, the procedure of measuring the difference of potential repeated. Strange enough, the same value 1,07 V was counted. Again the electrodes are connected in short circuit and after one week the procedure of difference of potential measuring is repeated measuring the same value for the cell potential.

There is no increase of Cu of electrode mass but there is a slow and uniform decrease of Zn mass.
Experimental interpretation
The purpose of experiment is to analyse the specific mechanism of salt bridge working.
If an ion circulation is necessary for cell working, the calcium and chloride ions should have a directional and clear movement toward a specific compartment. Calcium species must move toward copper compartment and chloride species must move toward zinc compartment.
From common chemistry it is known that calcium reacts with sulphate and a white precipitate must appear.
In the first case with diluted concentration of CaCl2 used for bridge construction it is difficult to arrive to a product solubility of CaSO4 and in this time the salt bridge should be exhausted.
In case of concentrated CaCl2 bridge, in the CuSO4 baker should appear a precipitate of CaSO4. The quantity of Cl and Ca gained by every solution can be determined analytically. After hours of cell working a small quantity of Cl should be put in evidence using AgNO3 as reagent.
Despite these considerations, CaSO4 precipitate does not appear spontaneously in the copper compartment. In the same time, silver nitrate does not precipitate chloride into zinc compartment. There is a small and insignificant transport of CaCl2 from the bridge in solution, due to the Fick diffusion and not due to an electrochemical transport.
In the case of salt bridge based on NaOH, the pH of the solution should appear basic in a Zn compartment, and Zn(OH)2 should precipitate too, which is not the case in reality.
The purpose of this material is to demonstrate that a Daniel cell with a salt bridge use a complete different mechanism for working by comparison with original Daniel cell. In the modern representation of Daniell cell (found in every book of physics and chemistry), there is no expected reaction between components.
Let’s analyze what does not fit in actual explanation of Daniel cell modelling. In fig. 2.7, a simple Daniel cell similar with any other picture from a low level school is presented. The salt bridge is represented by 4 KCl species, for a simple description of phenomena.
In order to work properly, Daniell cell require a compensation of ions from the salt bridge as described in fig. 2.8. Chloride ions compensate the Zn cations and potassium ions compensate sulphate anions in the opposite compartment. After a time it should exist a depletion of KCl in the bridge (in the picture are remaining 2 molecule instead of 4).
If this principle of cell working is correct, making a salt with a small quantity of salt, depletion and an exhausting of salt bridge should be counted. It can be imagined an experiment where the salt bridge is dissected and the depletion of salt concentration is analysed. But as is described further there are other and simpler possibilities to check the mechanism of cell working. If the quantity of salt (CaCl2 in our case) in the bridge is varied, the current must depend on salt concentration. This means at low quantity of salt it will mean a low current, and a high quantity will mean a higher current. The experimental measured currents show an insignificant dependency on the concentration of salt inside salt bridge. 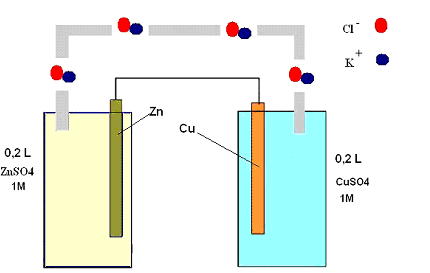 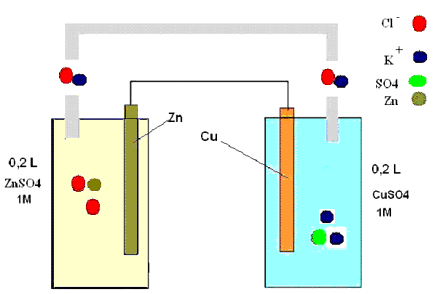 Let’s estimate the time of life for a salt bridge Daniel cell in short circuit mode and other strange consequences. It was used as salt in the bridge a NaOH solution captured in an agar agar gel, as described in below experiments.
The resistance of salt bridge is about 16 kΩ and the resistance of solution about 4 KΩ. Let’s exaggerate and consider that internal resistance of battery is 50 KΩ. In this condition considering the external circuit of resistance zero the short-circuit current is:
I =U/(R+r) =1,01/50000 = 21 microA
A little bit deeper into actual physic:

I = Q/t = ne/t
where n = number of charges in our case electrons; e the charge of electron; t – time of working in short-circuit
The actual Daniel battery is working in short circuit already from 8 days which means 691200 s. The number of electrons which has already passed by external conductor is:
n = It/e = 0,9 ×10 exp(20)
These numbers of electrons are coming from the Zn dissolution reaction:
Zn = Zn2+ + 2e-
which means a number of 0,4536×10exp(20) atoms of Zn are released in solution.
For this number of Zn cations a double number of hydroxyls ions must come from salt bridge.
Mass of Zn passed in solution is:
0,4536×10exp(20)×65,37/(6,023×1023) =4.92 mg
Let’s calculate the size of hydroxyl quantity present in the cell. For the salt bridge 5 ml of 0,1 M NaOH were diluted to 75 ml agar agar solution. After that the tube was filled with 20 ml of this solution.
The quantity of NaOH in 5 ml solution is: 20 ×10exp(-3) g
In the tube there is a quantity is 5×10-3 g
From this mass the mass of hydroxyl ions is:
5×17/40 = 2.125 mg
The stoechiometry of reaction:
Zn2+ + 2HO-  =Zn(OH)2
65,37 mg 2× 17 mg
4.92…………..y
y = 2,55 mg
So in order to neutralise the 4,92 mg of Zn2+ there are necessary 2,55 mg OH-. But the total quantity of hydroxyl available in the entire bridge is only 2,125 mg.
Considering that all this quantity is flowing into Zn compartment, there will remain still an excess of Zn cations already moving into solution and searching for anions able to maintain the neutrality of solution. Of course, in the Cu compartment there is excess of anions moving into solution and searching for cations able to maintain the neutrality.
The cell is still working at full potential after 8 days and this means there is a transfer of cations and anions from one compartment to another through salt bridge.
In the same time if all hydroxyl from the bridge is passed into solution the Zn compartment should have an alkaline pH. This is not confirmed by direct measurements - both compartment are at pH about 5, in acid region and not alkaline.
How is possible for formed Zn(OH)2 to have a week acid pH?
Further analysis must regard the formation of Zn(OH)2 precipitate. The product of solubility of Zn(OH)2 is KSP = 3 ×10exp(-17) so it is very easy to be observed visually a increasing of hydroxyl concentration. It reality the Zn(OH)2 precipitate does not appear even in other repetitions of experiment the concentration of NaOH was increased to 4M.
In some contradictory discussions with other physicists it was argued that only sulphate migrate through the cell in order to have a chemical reaction at Zn electrode. The case is analysed on the site and is too fantastic to be reloaded here.
The problem with the Daniel cell having a salt bridge in its constitution regards the absence of expected chemical reaction. In this later case a secondary reaction between Zn and water in one compartment generates the measured electric current. Therefore there is a tremendous difference between salt Bridge Daniel cell and original Daniell cell, invented in 1836 by John Frederic Daniell regarding the output power.
The reaction between Zn and water is slow and consequently in case of salt bridge the output power is smaller. From simple elementary school manuals to the high scientific treatise, the Daniel cell is presented with a salt bridge ….but this cell has never worked and will never work.