Concentration cell and foundation of electrochemistry
The presentation in the book is more extensive. Here you will find only the ,,article" submmited to ChemCommunication and considered not worth printing because ,,a series of stand alone experiments", made with scarce amount of money, cannot be published in a scientific journal. Part of the discussion is presented at the end of the material.

Although the concentration cells represent a theoretical and practical model for the conversion of chemical energy in electric energy, the actual explanation of cathode and anode events is far away from experimental reality. The experiments show no transfer of mass between electrodes and the migration of ionic species in solution is not consistent with theoretical frame. A new interpretation for electrode phenomena has to be proposed with a new insight for conversion of chemical energy into electrical energy.
A concentration cell is a galvanic cell with half-cells of identical composition but differing concentrations. The most common example is represented by two copper electrodes inserted in two solutions of copper sulphate at different concentrations. The connection between half-cells is insured by a salt bridge or by an osmotic membrane and at copper electrodes a certain voltage difference is measured.
In case of osmotic membrane, there is the possibility for ions in solution to pass through it, in order to equilibrate the concentrations, so after a certain interval of time both solutions arrive at same concentration and the difference of potential becomes null. In case of a salt bridge, this furnishes ions to solutions and the same events happen. In concentrated half-cell, copper is reduced and the remaining anions get cations from the bridge; correspondently in half diluted cell, copper is oxidized and pass in solution and the bridge furnishes anions.
As consequence, the dilution of the cathode half-cell is achieved by reducing Cu2+ to Cu metal and plating that metal onto the Cu electrode. In the anode half-cell, the Cu anode is oxidized to Cu2+ and, thus, dissolved into the solution, making the anode cell more concentrated.
In order to calculate the cell potential for up specified concentrations (0.01M and 1M) at 25oC, Nernst Equation is used:
E = E° - (0.059/n) log Q = +0.058 V
The concentration cells are an interesting case of cells, where no net chemical reactions occurs. The numbers of copper and sulphate ions in system does not change; it is the distribution of these species in the cell that provides the driving force. From thermodynamic point of view, two solutions with different concentrations will diffuse one into another in order to arrive at a uniform concentration. Putting copper electrodes into the solutions offers an alternative method of achieving the same end. One electrode can release a Cu2+ ion into the dilute solution; the electrons so produced then travel through the wires to the other electrode, and a Cu2+ ion is removed from the concentrated solution, reduced to a copper atom and plated out on the electrode. Both these events are simultaneously.

Experiment 1
The purpose of this experiment is to measure the mass transfer in case of a diffusion concentration cell.
Materials
• 1 M copper sulphate solution,
• 0.01 M copper sulphate solution
• two PVC containers ( as in figure 1- section), with copper electrodes, passing taps and the possibility of connection through a membrane filter or a thicker layer.
In the experiment the containers were 2 litres volume and the filter membrane used was a nylon 0,22 micrometer pore size. One container was filled with 1 M solution and the other with a 0.01M of CuSO4. The taps of system were opened (fig. 1) and the potential was measured in order to check the actual prediction (Nernst equation); further the system was shortcircuited and left for a week in order to equilibrate the concentrations in both compartments. After this time both electrodes were weighed with a precision balance and used again for another week, filling the containers with fresh solutions. At the end of second week again both electrodes are again weighed and the procedure of forming a new concentration cell was repeated. The entire procedure was repeated for the third week again. 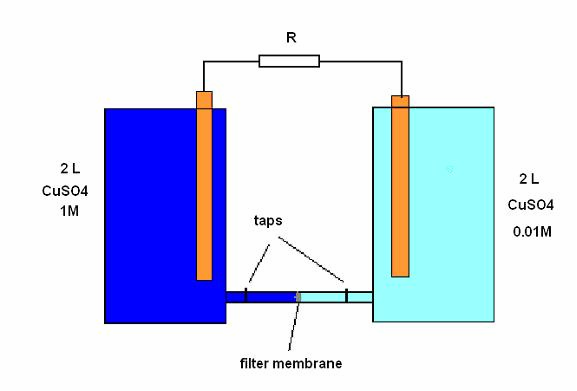 During these 3 weeks of concentrations equilibration there was no transfer of mass between copper electrodes. On the electrode immersed in concentrated CuSO4 solution, in time the blue CuSO4 adhere to the electrode and the mass of this electrode is increased a little bit (about 1 g). If the electrode is washed with pure water, the final mass of electrode is the same like initial one.
The increase of electrode mass found in the diluted solution is about 0.3 g. Again after simple washing the mass of this electrode remain invariant. The increase of mass electrodes is caused by CuSO4 which adhere to the metal proportional with its concentration in solution and not due to other processes.
In the experiment, the masses of both electrodes were measured in order to avoid any experimental errors. A mass transport of Cu should give us a correlation between an eventually decrease of an electrode mass and increase of another one.

Experiment interpretation
What are the predictions of actual physical chemistry for up presented experiment? To be more precise what should be the theoretical mass of transported copper?
If anode generates a Cu cation, another sulphate anion must pass the membrane in order to have the neutrality of solution and simultaneously a copper atom is deposited on the cathode. The final concentration of both solutions is about 0.5M (the initial concentration of anode compartment is neglected). In order to have a 0.5 M sulphate concentration in anode compartment, the quantity of copper released in 2 litres of solution must be equal with 1 mole, which means 63,5 g. On the other hand the mass of cathode should appear increased with 63,5 g.
As initial mass of electrodes was 25 g, normally after one week one electrode must be dissolved into solution and the mass of second electrode should be increased with correspondent quantity.
As the solution was changed once a week for three times, theoretically, the total quantity of copper displaced should be about 190 g. It is impossible to not see such a mass transfer even with naked eyes.
The experimental reality is completely different. Except the CuSO4 material which adheres to electrodes, no increased mass of copper is observed for one electrode and no decrease mass for the other electrode.
The up presented calculus was made in considering the concentration cell working with a yield of 100 %. Of course there is a Fick diffusion between compartments which diminishes the copper transfer. In case of a concentration cell working with a yield of 0.1 % (which is absurd because the cells are recognized to have a better yield then another thermodynamic processes), at a single concentration equilibration should appear a mass transfer of 0.1*63.5 =6,35 g.

The purpose of this experiment is to analyse how a salt bridge concentration cell works.
Materials:
• 1 M copper sulphate solution,
• 0.01 M copper sulphate solution
• two small containers with copper electrodes,
• one salt bridge made by saturating a piece of cotton in a CaCl2 solution and another one made with agar agar and CaCl2. The use of CaCl2 in the salt bridge instead of KCl is motivated only by the simpler analytical possibilities of Ca determination.
Two concentrations cells are build up using the up presented salt bridges and their potentials are measured. After this operation, the Cu electrodes are put in short circuit with a simple metallic conductor in order to hurry up the electrochemical processes as in fig. 2. 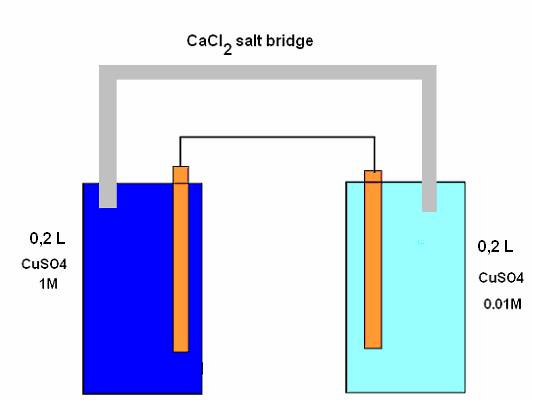 Figure 2. Salt bridge concentration cell details
The potential difference between electrodes were measured after 3, 5 and finally after 8 days of continuous cells shortcircuit.
In case of agar agar-CaCl2 bridge, the potential difference remained the same like the initial one (E’ = 0.048) after this intervals of time. The measurements of Cl and Ca concentrations in both compartments,indicate a level of their concentration under the chemical limit of detection (no precipitation with AgNO3 and H2SO4, few ppm detected with more specific methods).

In case of cotton salt bridge at the same time interval there is a diminishing of cell potential with approx. 0.002 V after 3 days and with approx. 0.007 V after another 5 days; after 8 days the variation of potential was about 0.01 V (initial measured value was 0.046 V). Both Ca and Cl species were detected in the anode and cathode compartments by precipitation with AgNO3 and H2SO4. A normal analytical procedure was followed for measuring their concentrations and it was found that:

Anode [Ca]=[Cl]/2=1.74 M/L
Cathode [Ca] =[Cl]/2=1.67 M/L
The absolute values of Ca and Cl species at anode are a little bit higher than at cathode region (probably due to the small different level of immersion of bridge into solution).
Again there is no transfer of mass between electrodes (both electrodes after washing with clean water have the same mass as initial ones).

Experiment interpretation
As far the masses of electrodes remain constant, the same considerations presented at first experiment are to be repeated here.
More important for the foundation of chemistry is the analysis of physical and chemical phenomenon which should take place at cathode and anode. Why copper ions should be reduced in case of concentrated solution and copper should be oxidized in diluted solution? Why there are not opposite phenomenon, more precisely Cu2+ from diluted solution reduced and in case of concentrated solution Cu metal oxidized?
Are directions of chemical reactions dictated by gradient concentration in the last time in chemistry?
From low level chemistry it is well known that an oxidation process takes place in presence of a reducing agent.
For example Cu metal can be oxidized by an oxidizing agent like oxygen or nitric acid. On the other hand a reduction of Cu2+ needs a reducing agent like hydrogen, etc. Equations for the reactions are
2 Cu(s ) + O2(g ) --> 2 CuO(s )
CuO(s ) + H2(g ) --> Cu(s ) + H2O(g )
By contrary to this well known comportment of copper, a simple diffusion of ions (without any chemical processes according to actual interpretation) in case of a salt bridge cell is able to produce an oxidation of Cu to one electrode and reduction of Cu2+ to other electrode. This actual explanation is completely inaccurate and in contradiction with experimental results.

Thank you for your submissions to ChemComm, which I have read with interest. I regret to inform you however that this manuscript will not be considered further as a submission to the journal. All manuscripts submitted to ChemComm are initially evaluated by the Editors to ensure they meet the essential criteria for publication in the journal. I'm sorry to say that on this occasion your articles will undergo no further processing.

In the justification accompanying manuscript CC-COM-05-2013-043664, you mention that the article is already part of a published book. As the content is already published and in the public domain, we cannot consider it for publication in ChemComm as it is a breach of the terms of our Licence to Publish, in particular Section 2, which states that:

(c) the Work has not been and will not prior to publication by the RSC be published, with the sole exception of
deposition of the pre-submitted manuscript in non-commercial subject repository(ies).

Furthermore, we do not feel that that a series of stand-alone experiments warrants publication as a series of communications.

Papers published in ChemComm should report preliminary accounts of original and significant research that will appeal to a wide general readership or be of great interest to the specialist. The rejection rate for papers submitted to ChemComm is ~70%. Further information regarding our policy on the initial assessment of submissions can be found on our website at http://www.rsc.org/Publishing/Journals/guidelines/AuthorGuidelines/JournalPolicy/initialassessment/index.asp

I am sorry not to have better news for you. Thank you for giving us the opportunity to consider this work; we wish you every success should you decide to submit the article elsewhere. Thank you for your interest in ChemComm.