Experimental part
The proposed experiments are very simple and can be easily performed home.
A solution of sodium chloride is prepared adding a spatula of salt in 100 ml water and the solution is transferred into a spray bottles.
After that the solution is sprayed in a gas burner flame and the colour of flame is observed.
The colour of flame turns from blue to yellow when NaCl salt is spayed into flame. The flame colours are more easily observed if the experiment is carried out in dim light, such as a room with drawn curtains. 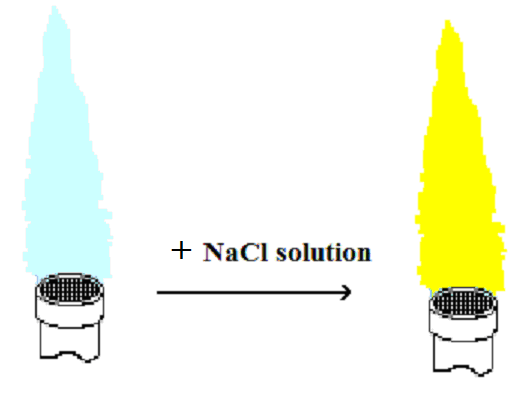 In order to have a comparison a low pressure sodium vapor lamp is taken into consideration. Usually these tube-shaped lamps have sodium vapor inside. When the lamp is connected to an electric source, as the sodium gas is energized, it emits characteristic wavelengths of light and a yellow color is produced. The yellow colour for sodium should be particularly familiar as this is the same colour that comes from the sodium bulbs in street lamps. 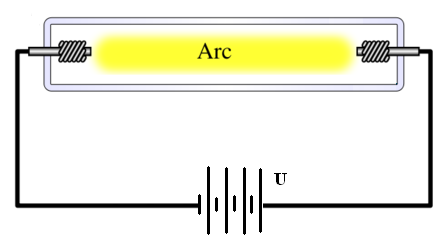 The Flame Emission Spectroscopy process is used extensively in chemistry because the light emitted from glowing gases is characteristic of the elements in that gas, and the brightness of each band of light is directly proportional to the quantity of that element in the glowing gas.
Essentially, when heat is applied to a molecule, the electrons become excited and some of them can move up to higher energy levels or excited states. When electrons reach these excited states, they have to fall back down to their ground state. During this late process, atoms give off energy in the form of light.
There are multiple approaches to explain the discrete nature of emission lines based on quantum theory and further advanced quantum models. It is not the case to enter into details here. What is important for the present experiment regards the absence of emission spectra for chloride because its emission is outside visible range and only the presence of line or lines coming from metal species.
The detailed discussion about electric charge movement and gas tube discharge was presented at another link on the presented webpage:
(to be added)
In a simplified description, the electrons coming from electric current, having a minimum specific energy for every gas, are powerfully enough to hit the gas molecules, to generate new charges between cathode and anode and the low rarefied gas become conductor of electricity. Because like electrical charges repel one another and unlike charges attract each other, a free electron is strongly attracted to any nearby positive ion. This attraction leads to the rapid combination of the positive ions and electrons into neutral particle, and this process is responsible of light production and its color depends upon on gas type.
Thus, to produce a gas discharge and tube glows, electrons must be removed from neutral molecules and recombined with positive ions to form other neutral molecules. The practical way of producing this ionization is by passing a current through the gas.
When voltage is applied to the electrodes, cathode emits electrons and anode attracts these electrons. If the voltage is high enough, the electrons will be attracted with tremendous force and will accelerate toward the positive electrode reaching speeds of tenth of km per second.

Why the actual interpretations are a monument of absurdity….

Completely inconsistent with experimental reality, in the actual quantum or non quantum theories, was found to be the color flame formation for salts solutions. If common sodium chloride is considered, it is completely inexplicable the yellow color caused by a sodium electron ,,transition" between two energy levels.
According to quantum mechanic sodium is ,,already" present as cation (the outer electron is lost) in the crystal or solution of NaCl and practically it is impossible to produce an emission spectra.
In order to get sodium emission spectra a reverse electron transfer from chlorine atoms must take place in a first step. But this means in the flame condition sodium chloride is forced to be decomposed to Na and chlorine according to the scheme:

After that a sodium neutral atom has the possibility to be excited and outer electron pass from ground state to an excited state and later it fall back on a specific photon is released as in:

It is very strange that no scientist has ever thought at consequences of the actual accepted mechanism for flame color generation.
If the up presented process is correct at a simple addition of salt in flame other different phenomena can be counted. The flame by products will have a basic character due to the presence of sodium hydroxide and secondary an intensification of flame must appear. This is because new generated hydrogen reacts again with oxygen and water molecule is formed:

Both phenomena are easy to be verified with simple laboratory devices. This effect of flame increasing must be observed with naked eyes and of course should be dependent on the salt concentration. Chlorine formed during this hypothetical mechanism represents a third possibility to check the actual mechanism of flame color formation.
A guilty silence about the mechanism of salt flame color persists in quite all appreciated treatises of chemistry and physics.
The possibility for a sodium internal shell electron excitation can be easily ruled out if the flame color and the color produced by a lamp containing sodium vapor is analyzed. It is impossible for an internal electron from sodium, having principal quantum number equal with 2 to produce the same photon like a 3s electron jump.
As was presented in a previous link for other gas tube discharge compositions, the ionization of sodium vapor in case of sodium lamp is incompatible with observed spectra.
For the simplicity of interpretation, let s consider that in a first stage a sodium atoms are ionized as in fig 4 a) and after a while the sodium cations catch another electrons from its surroundings and a emission spectra is generated as in fig. 4 b). When free electrons and cations combine in recombination process, a complex spectrum with lines in UV, VIS, IR, etc. must appear. With this complex spectrum, the yields of produced visible light should be lower then a normally thermal source. 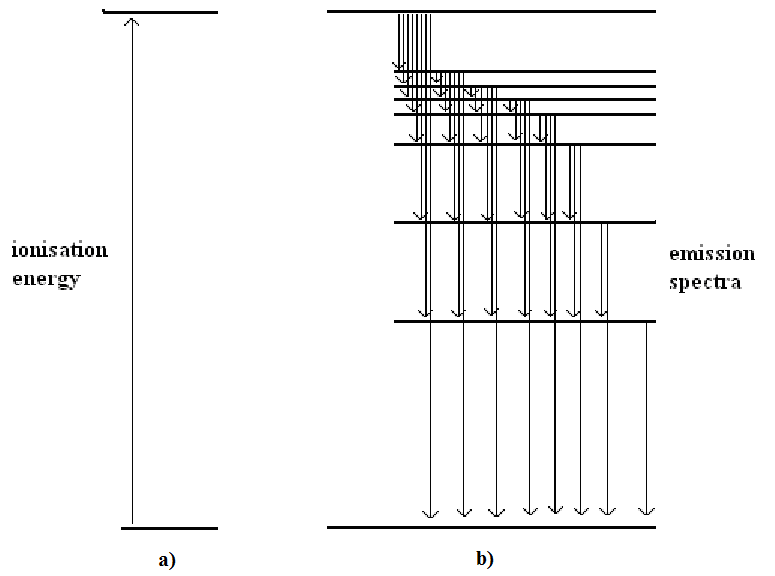 But the reality is completely different, and a gas tube is very specific. In normal condition, the emission spectrum is composed by a single line or combinations of very few lines.
In the same time it must be highlighted that a direct collision between a free electron with high energy and a positive ion, should determine the generation of primary X-ray photons and in an indirect manner a visible photons.
Despite this prediction, most of common used tubes (mercury is an exception) works directly with visible photons and this means the impossibility of existence of an ionized gas, but only an excited gas. Even in case of mercury the line transition in UV does not mean ionization, it is only excitation, with a greater gap between ground level and excited level.
There is a simple problem with actual explanation: in order to have a consistent explanation one of up presented ideas must be ruled out. Or a gas tube permit an electric current to pass inside in absence of a gas ionization process, or the quanta hypothesis is false. In proposed theory quantum idea is ruled out and the ionization phenomenon is not a dominant factor responsible for gas tube glowing.

The entire frame of flame formation, blackbody radiation, flame conductibility, flame colours, etc. is changed in proposed theory and a more detailed analysis of these concepts will be presented in thermodynamic and physical-chemistry books.