A new fundamental effect in science (second only as notation)

The effect is also a postulate of a new theory of magneticity (actual electromagnetism). For our daily practical activities this effect has little importance, but it has paramount importance for astrophysics and for a real foundation of science.

In a nutshell the description of the effect is:

A homogenous fluid, electrical neutral, in rotational motion, generates a macroscopic magnetic field. The size of generated magnetic field is dependent on a series of parameters like: the molecular structure of fluid, its electrical conductibility, the speed of rotation, the character of motion - laminar or turbulent,  etc. In the book a more detailed analysis of this effect will be made and a consistent explanation based on a new model of the liquid state is offered.

A solid in rotational motion could generate a magnetic field only in case of inhomogeneous structure of the solid body.

Of course, solid materials which have a magnetization due to their structure are not considered because in this case an the generated magnetic field has another ground.

A gas, ionised or not ionised, in rotational motion cannot generate a macroscopic magnetic field.

The effect was already confirmed experimentally by famous Riga experiments or other like type experiments made with molten sodium metal.

A simple cut off experiment can be performed in order to verify the validity of the effect for the ,,liquid state” of matter and not only for some molten metals.

If instead of sodium metal, some magma recovered from active volcanoes eruptions is introduced in such installation, melted and forced to rotate, a magnetic field will appear again ,,from nothing”. Only the size of generated magnetic field will be different as value, because the molecular structure of silicates are very different from molecular structure of metals but the rest …. is the same.

Even performed Riga experiment cannot be interpreted in actual electromagnetism, so it is easy to imagine that this new set-up experiment will give very serious head aches to the theoreticians.

On the other hand, this simple replicate experiment demolishes everything it has been written about internal structure of Earth or about other similar celestial bodies. For a ,,common sense” mind it is absurd to think that inside Earth molten metals are somehow restricted to some spatial regions, they melt only a solid silicate crust, and take care to eject only material from this crust during volcanoes eruptions without any contamination.

A convection motion inside the outer core or mantle should be discarded in principle only for the fact that this motion will mix silicates with molten metals at the boundary between these regions and in few centuries, volcanoes eruption should bring metals to the surface. 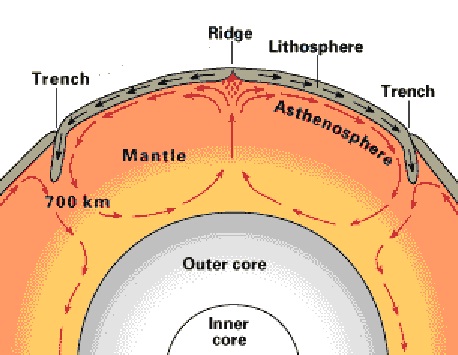 Even without this convection motion, at geological scale it is impossible to prevent this mix and if Earth age is really few billions of years, then … something is absurd in our science.

Probably there is inside Earth a ,,special purification unit” able to separate molten metals and send them back toward nucleus and the molten crust ingredients are ejected towards surface.