Comets are non-homogeneous celestial bodies, and therefore they may be fragmented during their orbital movement. Let us examine a few examples of comets fragmentation.

The Comet 1882 II divided before the astronomers' very eyes. The phenomenon was firstly observed by Barnard on September 27, 1882; the nucleus of the comet began to elongate in the direction of the Sun, and in October the lengthened nucleus got thinner in the middle and divided into two fragments which slowly distanced one from another.

The Comet Biela was discovered in 1846 and permanently observed for about 12 weeks. Its orbital parameters and period of movement (six years and nine months) were determined exactly enough. The comet came back punctually in 1832 and 1839, and on these occasions new observations were made on its motions. On its return at the beginning of 1846 it appeared with a distinct light spot which afterwards became a second comet. The primary component was much more massive than the latter one, the former was situated south-west of the latter, and passed through the perihelion 0,08 days earlier. In 1852 the comet Biela again appeared punctually, but the two fragments were separated by a much wider distance than six years before, and the primary component passed through the perihelion 0,68 days earlier than another. In 1859 the return of the comet Biela was not favorable to observations, and in 1866, in spite of good conditions, it was not observable; it had disappeared. H.I.d'Arrest and E.Weiss demonstrated that the "falling stars swarm" apparently coming from the constellation Andromeda moves approximately on the orbit of the recently disappeared comet, what indicates that it completely disintegrated giving birth to that swarm of meteorites.

The Comet West (1976 VI) on March 1976 broke into four pieces, all having the same spectrum, what proved that they had the same chemical composition. On March 8, the comet was a single piece; on March 12, the first signs of separation appeared; on March 4, the four fragments were clearly distanced.

In order to explain the fragmentation of the comets and the motion of the particles after fragmentation, it is necessary that the actual theories include some new, supplementary, hypotheses: collisions of celestial bodies, nuclear explosions, etc.

Let us try to explain the movement of the particles resulting from the fragmentation of the comets by means of the supplementary corrective term. Suppose at a distance r from Sun a comet with mass m and density p' fragments in two mini-comets with masses m1 and m2, and densities p'1 and p'2. Suppose r'1<r'< r'2. We want to know how do modify their trajectories the two mini-comets after fragmentation. Before the fragmentation, the comet had the radial acceleration:

After fragmentation there is:

After fragmentation the mini-comet with less density moves faster on the orbit.

Nevertheless, if at placing on the orbit has the celestial body a higher velocity than the circular one, then its orbit gets elongated so more as the supplementary velocity is higher. From v1>v2 it results r1>r2, that is the body with less density is circumscribed on an orbit more distant to the Sun than the body with higher density.

After fragmentation the two mini-comets change their orbital parameters which differ from the parameters of the mother orbit. 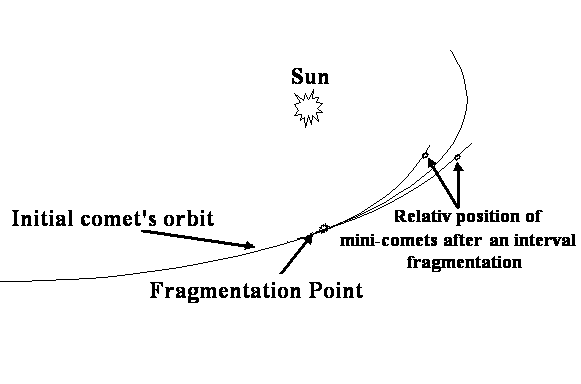 At  r'1< r'2     r1 > r2  (2.6)  that is after fragmentation are the particles with different densities inscribed on different orbits around the force center.