A new fundamental effect in science (No. 1)

The effect consists in apparition of an electric current when a semiconductor and a metallic electrode are immersed into a liquid or a solution. The size of the effect depends on a large variety of factors like:  semiconductor structure, nature of metal and type of solution.

The effect is simple and it can be observed immediately using some simple experiments.

In deionised water the effects is less evident then in saline solution (as example).

Put a piece of copper metal into contact with water and connect it with a piece of graphite through an ammeter. When the graphite is immersed into water a current of about 1 mA appears into circuit. The current decreases slowly in time. If you take out the graphite, wait for few seconds and immerse it again into water, the electric current appears again.

Of course with such ,,current size” few people will think that such effect will ever have a practical application…

But, if you change a bit the set up, the effect becomes quite spectacular…

Take a bigger piece of graphite ( in my case I repeated the experiment using  a graphite  cylinder about 5 mm diameter and about 5 cm long recovered from a commercial battery) and instead of water prepare a saturated solution of NaCl and repeat the experiment.

The current measured into ammeter when the graphite is immersed into water is about 20 mA. If you keep the graphite into solution, the current decreases slowly in time …. 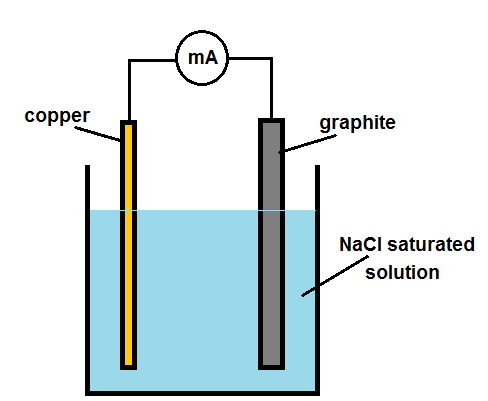 With this size, and looking for other optimized possibilities, such effect can be used even in electricity production.

I present here this effect because it cancels everything you have ever learned about electricity.

Both metal and graphite electrodes are not ,,electrised”, so there is no charge transfer between these components in order to explain the generation of this current.

There is no magnetic field in the circuit able to generate an electric current….

The effect can be observed even in case of two different metals or alloys which do not react with electrolyte, but the size of the effect is diminished. In this case the effect has merely a theoretical significance.

The explanation of this effect rules out the actual definition of electric current seen as a charge movement between two different circuit regions.

The entire explanation … in the book …