As far the electric current into a circuit containing a solution is smaller due to the resistance opposed by solution, a powerful DC source is needed. With a source able to deliver at least 12 V and 3 A, the magnetic effects around PM portion of the circuit are observed using a common magnetic needle. In case the ionic conductor is made by a circular plastic tube, the current must be even greater because magnetic field around ionic conductor is shielded by the plastic tube.

In our experiment magnetic effects are observed for both portion of metallic and ionic section of circuit (the magnetic needle is perturbed from its N-S alignment and rotates in conformity with direction of electric current delivered by DC source).

The obtained results seem to be in agreement with other replications of this experiment. As comparison a similar experiment described in a well known experimental book - Chemical Demonstrations, (vol IV, Bassam Shakhashiri, Chapter 11.1. - Magnetic field from a conducting solution) is presented below:

Such addition and removal from ions result in chemical transformation

What a nice presentation,  but what an absurd interpretation …..

For simplicity, I will start with expected result when a KCl solution is used in ionic conductor. As far the mobility of K species (0.000670) is quite the same like mobility of chlorine species (0.000678), their opposite movements will have as result a double magnetic effect (fig. 2). Harald von Linden (EPFL ) pointed out that here there was an error, so I corected the picture and the value of B. 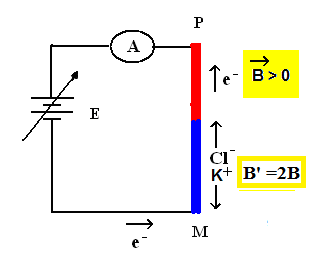 What should happen when a sulfuric acid solution is used in ionic conductor?

In this case, as far hydrogen positive species moves faster then sulfuric species, the magnetic field around ionic portion of circuit must be somewhere between B and 2B as value.  Is this value observed into practice?

The experimental results rule out completely the actual interpretation for ionic effect of charges movement. If after a time interval the speed of both cations and anions becomes equal, there is an overlap with previous situation ….

What should happen when KOH solution is used as ionic conductor?

In this case the mobility of potassium species is smaller then mobility of hydroxyl species and again the value of magnetic field arround ionic part must be somewhere between B and 2B as value.

A new basement for electromagnetism as a whole has to be frame out and this work has been started around 2005. In this time interval, the official science has done everything possible to obstruct it and to spend as much money as possible on stupidities…