Even the substances with acid and alkaline character are known from ancient times, first theories regarding these phenomena are proposed later, after XVII century.
Boyle was first who proposed this classification in acids and basis having as background their properties:
• Acids present sour taste, are corrosive to metals and become less acidic when mixed with bases.
• Bases feel slippery and become less basic when mixed with acids.
Lavoisier was trying to explain the comportment and composition of acids; according to him acids are compound which contain oxygen. The idea turned out to be wrong as was demonstrated by Davy’s experiments, who supposed that hydrogen was the cornerstone component of an acid. Liebig proposed that an acid is a hydrogen-containing substance in which the hydrogen could be replaced by a metal.
Arrhenius proposed the first argued theory of acid and basis based on electrolytic dissociation. According to this, depending on the chemical structure, certain substances become ionized in solution.
An acid is any substance which delivers hydrogen ion (H+) to the solution, based on equilibrium:

A base is any substance which delivers hydroxide ion (OH¯) to the solution, according to:

The theory limits the acid-base character only to hydrogen or hydroxyl containing substances and does not take into consideration the importance and influence of solvent used.
Brønsted and Lowry published, in 1923, a new theory about acids and bases behavior, where an acid is a proton (hydrogen ion) donor, comparatively with a base which is a proton (hydrogen ion) acceptor.
The theory is used even in our days, with small amendments (a proton is not freely donate, it is necessary an energy to be removed from acid), because it is considered to describe well the comportment of acid and basis in protic solvents. The theory fails to explain the acid base behavior in case of aprotic solvents.
Lewis overpasses this problem and in his proposed theory and acid is an electron acceptor, by comparison with a base which is electron donor. In a modern approach, "Lewis acids" are electron-deficient substances and "Lewis bases" are electron-rich substances.

Why are the actual theories wrong?

If the acidity strength of hydrogen halides is analyzed, it is observed that the acidity increase from HF to HI according to following series:

HF,  HCl,  HBr,  HI
Increasing acidity
Taken into consideration the electronegativity of elements, when water is used as solvent, the actual interpretations appears contradictory.
As is observed in tab1., the polarity of OH bond is intermediate between HF and HCl bound.

Arrhenius electrolytic dissociation theory supposes that water can dissolve many compounds by separating them into their individual ions.

If the concept of solvent polarity is the reason for electrolytic dissociation, according to up presented data, the comportment of hydrogen halides should be:
• Water dissociate in a stronger manner HI, less HBr and lesser HCl;
• When HF is added to water, due to its stronger polarity, water should be dissociated in ions according to following reaction:

The explanation is very simple: flour is the most electronegative element and of course flour gains a proton from water. It is absurd in actual explanation that oxygen takes a proton from a HF.
• In actual scientific texts the influence of acid over solvent is not considered. This is an absurd thing. For example, in case of a 50% concentration of HCl solution, there should be a closed number of chloride ions and hydroxyl ions. This is because chlorine and oxygen present closed electronegativity and consequently not only water convert HCl in ions but also HCl convert water in ions

If the ionization reactions for a common covalent compound are analysed other inadvertencies appear in the frame of actual physics.
It is accepted that covalent compounds are ionized after a reversible reaction like:

It is necessary to analyze what energy is necessary for obtaining these ions and what are the consequences of these ion generations and their neutralization. In the book, the energetic aspect will be detailed; here only the electron transfer from chloride to proton, in case of reverse reaction will be analyzed:

In this process, as hydrogen in the left part is ionized, when capture an electron, an emission spectrum must appears. The electron coming from chloride can jump through intermediate levels of hydrogen producing a luminescence of the sample as in fig. 1. 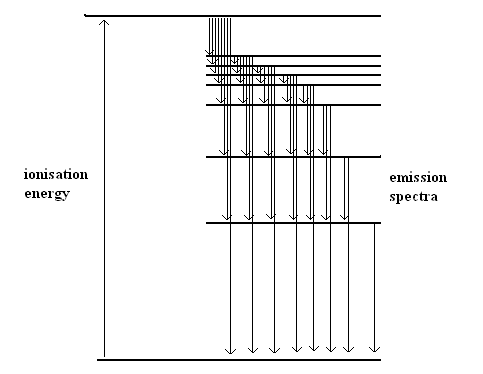 Practically at the simple adding of a common acid in water emission spectra similar of hydrogen must be measured by a detector. In this case it must appear UV, VIS and infrared lines for a detector placed near sample.
Of course the effect should be observable with naked eyes in case of a concentrate solution of acids.
Is there such evidence registered during centuries of solutions preparations?
The absence of such effect denotes the absence of charge formation during ionization.