The particles forming the head and tail of the comet result from the fragmentation of the nucleus, and therefore, in order to describe more easily their motion, this was done in relation to the nucleus of the comet.

Because the cometary’s tail is generally in opposite direction to the Sun, even since Kepler's time and till our days astronomers believe that this fact is due to an expelling force of the Sun. They imagined all kinds of specific mechanisms to explain such a repulsive push opposite to the gravitational pull. The value of acceleration produced bay FN at a distance 1a.u.. is K2. At the distance r to Sun this acceleration is K2/r2.

If the expelling is Rp more than the pull, the value of the repulsive acceleration is K2Rp/r2.

Both accelerations have the same direction but contrary courses; consequently, their resultant will be:

The repulsive acceleration of the moving particles in relation to the nucleus is:

Cometary’s tails are classified by Bredihin according to the mean of acceleration in relation to the nucleus, namely:

-Type I - where 1+μ 12; gaseous tails, nearly rectilinear, in the extension of the radius vector of the comet, slightly curving in the opposite direction to the motion.

-Type II - where 1+μ 1; the tails consist of solid dusts, strongly curving in the opposite direction to the motion.

-Type III -where 1+μ 0,2; they are abnormal tails directed from the nucleus at Sun; they consist of solid fragments and are very curved in the opposite direction of the motion.

In this classification of the cometary’s tails it is noticeable that the "repulsive push" depends on the nature of the substance: the most accelerated is gas, the solid dust is less accelerated.

The present explanation of forming cometary’s tails is that solar heath evaporates the nucleus gases that bind the solid particles of the nucleus, and then the solar wind dissipates them in an anti-solar direction (in an opposite direction to Sun). This explanation is frequently in contradiction to experimental data.

There are many comets with a perihelion distance bigger than 2a.u., which remain permanently to such a distance to the Sun that the solar heath cannot practically produce any effect. Nevertheless the comet Humason (1962 VII), for example, although situated beyond Mars's orbit, had a large tail. The big comet in 1927 had a perihelion distance of more than 4 a.u. and was visible with the naked eye. Is it possible to accept that those were mere ice conglomerates having dimensions of some tens of kilometers which evaporated under the solar heath when situated at the same distance as Jupiter?

Other comets move in the immediate vicinity of the Sun and show only a tiny tail (Ikeya-Seki 1965). (apud Littleton).

According to the vortex theory, cometary’s tails are due to the frequent but permanent fragmentation of the comet nucleus and to the acceleration of different particles resulted.

On the basis of the nucleus composition comets may be classified as follows:

Comets type B contain a homogeneous nucleus formed by physically similar particles or different particle with quite equal density.

Suppose a comet type A being at a distance r from the Sun. During the orbital motion, because of the tiny forces of cohesion, from the comet nucleus may result by fragmentation the following types of particles:

a) particles with less density than the nucleus has (gases and solid dust, r'1);

b) particles with higher density than the nucleus has (solid particles, r'2);

c) particles with the same density as of the nucleus.

According to the above demonstrated, for the r'1<r'nucleus < r'2 there is:

After fragmentation, the motion of the particles resulting from the cometary’s nucleus is differentiated (see fig. 2.2), that is:

¨      The solid particles having higher density than the nucleus are the least accelerated; they will be inscribed on interior orbits of the nucleus and shape abnormal tails directed to Sun;

¨      The solid particles having lesser density than the nucleus and acceleration similar to it will be  consequently inscribed on orbits exterior to nucleus as if "pushed" by it. These particles shape tails of type II;

¨      The volatilized particles (gases), which have the least density, will be the most accelerated in relation to the nucleus and will shape tails of type I on outer orbits to nucleus.

The main cause of cometary’s tail formation at type A comets is the non homogeneity of nucleus structure and the absence of strong cohesion forces to tighten up the nucleus components. The solar heath, respectively the solar pressure, beginning from a certain distance from the Sun, may intensify the disintegration process of the nucleus, but cannot determine to a great extent the different acceleration of the particles resulted from fragmentation. 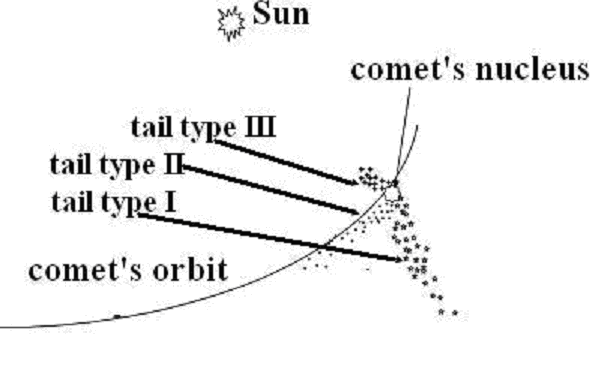 Usually, a comet of type A has a multiple tail.

"Between April 22 and 24 the main tail of the comet arrived at 25-30°, and the abnormal tail directed to Sun reached the unusual length of 15°."

"It passed through the perihelion on March 1, 1744. In a week it got visible again. It was observable in the morning before the Sunrise. When the comet head was under horizon, above it were visible six bright tails, similar to aurora borealis.

Comets type B. Because they are formed from one type of material (r=constant), these comets have no tail regardless of their components being mechanically joined.

For example, Comet 1892 - III, discovered by Holmes on November 6, 1892, after it passed on June 13, 1892. In the moment of its discovery, it was visible with the naked eye (magnitude 4 - 5m) and looked like a round nebula with a 5' diameter, a little brighter to the center, but without both nucleus and tail.