This is a revised material of a ionization energy variation presented in Atomic structure book. Figure 1. Ionization energy variation
For H which has only a single electron moving around nucleus there will be a single value for the ionization potential.
For other elements, the removal of each subsequent electron requires even more energy, so a distinct and increasing value of ionization potential is measured for closer electrons of nucleus; it becomes more difficult to remove additional electrons because they are closer to the nucleus and thus held more strongly by net positive charge of nucleus.
More generally, the nth ionization energy of an atom is the energy required to strip it of an nth electron after the first n - 1 have already been removed.
In order to explain the ionization energy, quantum theory does not have a ,,special formula” so, mathematically, the old Bohr treatment is accepted.

Why the actual explanation is erroneous…

Analyzing the ionization potential of first isoelectronic series (one electron around nucleus) we observe a quadratic dependency related to the atomic number Z. The quadratic dependence is easy to be observed for first isoelectronic series but for other series is hidden by a constant factor addition in the energy expression. In order to arrive to a linear dependency we will work with square root of ionization potential and we will make also some simple mathematical tricks. 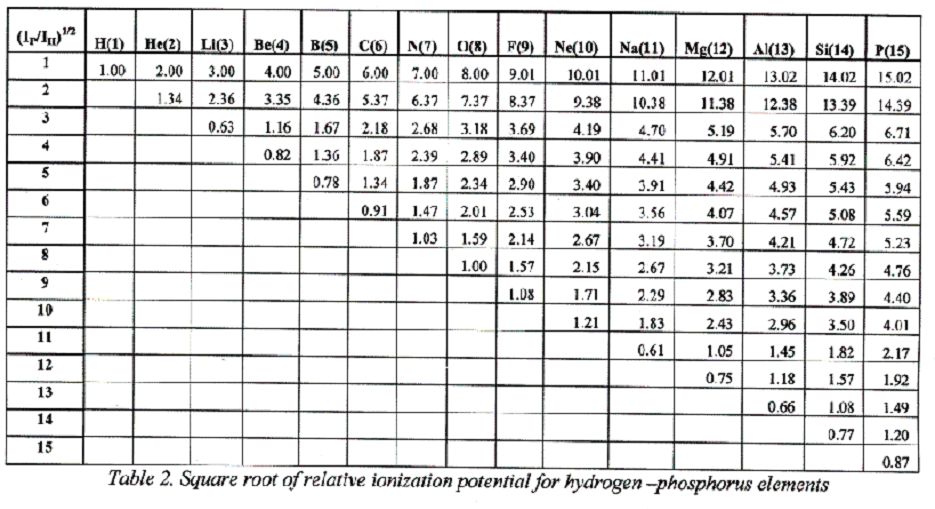 From the graphical representation of ionization energy we can observe that there is a coupling of electrons in pairs of minimum 2 electrons with the same slope of energy variation and for higher Z, a coupling in more pairs of two electrons having the same slope for energy variation. For example after first pair of electrons, a number of four pairs (eight electrons orbit) present the same slope in energy variation. These distributions of ionization potentials contradict quantum mechanic theory and also wave–corpuscular hypothesis. It is impossible for an electron having a complicated movement, given as a probability, to present a linear dependency of ionization potentials.
As consequences we can suppose, for the moment, that ,,adding” one or more electrons to a hydrogenoid atom will have as consequences modification of energy interaction with a simple additional term; the variation is related to the atomic number.

In the same time for the Moseley low new explanation can be formulated. The jump of electron from a superior level to another inferior level, with both energy levels linear dependent on atomic number will produce a photon with an energy proportional with this difference. In conclusion the ecranation factor due to other electrons from atoms, actual accepted by quantum mechanic is wrong and the formulation of Moseley low must be corrected.
Therefore, the proposed theory, presents a simple and easy to follow variation of potential ionization in periodic system which suppose a precise trajectory of electron around nucleus. Quantum theory explanation based on density of electron probability around nucleus and wave-corpuscle duality are ruled out.
The linear dependency of relative ionization potential energy is accurate also for so called d layer and f layer in actual quantum mechanic. The only difference observed in distribution of relative ionization potential for different layer is represented by different slope.
A detailed discussion of these aspects will be made at electron arrangements on multielectron atoms.

Quantum mechanic collapses completely when, further, the concept of work function is analyzed.
The work function value for metals must be equal with ionization energy, because in this case, based on actual model of metallic bond, electrons are free to move inside crystal but find a confining potential step U at the boundary of the metal.
In a comparative way, for some elements, in tab. 1 the values for their first ionization values and work functions are presented.

Further improvements are foreseen to the present text.