The bending of a flow of water in close proximity of a charged object is known probably from the beginning of electricity as science.

Internet and popularizing books are full of experiments related to this topic. A charged balloon, rod or even a comb can bend a stream of water coming from a faucet.

The explanation of this bend is still a controversy in physics and therefore the subject is not presented in more advanced texts. Here are listed the main explanation found in different books or internet for this efect.

1. Some scientists believe that electrical charges in water are somehow separated and than the attraction occur. The molecules in the water stream are neutral – they have both positive and negative charges, and all their electrons are localized around their atoms or shared in covalent bounds. When a charged object moves (in our example a negatively charged) next to the water stream, the electrons that are closer to the object are being repelled away. The molecules that are closer to the charged object, therefore, become positive, and away from the charged object there is more negative charge (more electrons). 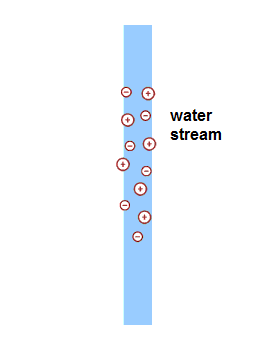 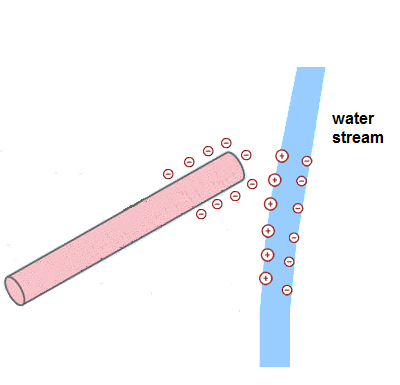 There is only a ,,little problem" with this explanation; it comes into contradiction with other facts from electrostatic or even with concept of ,,free charge". Water has a neutral molecule consisting of two hydrogen (H) atoms and one oxygen (O) atom - a total of 10 positively charged protons - with a complement of 10 electrons to exactly cancel out the positive nuclei so there is no net charge to cause the observed attractive force. All electrons are bound to the nuclei or involved in covalent bounds. The induction mechanism cannot apply to molecule of water itself. As is already known in electrostatic, induction works well for metallic compounds where electrons are delocalised (according to actual quantum mechanics) and they can travell easily along conductor.

2. Second explanation is based on the intrinsic water dipole moment. Although water molecule is neutral, as far the electronegativity of oxygen is different from electronegativity of hydrogen the bond between these atoms is polar. This fact correlated with the geometry of water molecule leads to a polar molecule of water, i.e. water molecule presents an electrical dipole moment. In principle such dipole moments should orientate into an electrical field in order to attaint a minimal energy and as result a bend of fluid would be possible. Though simple experiments made with liquids without dipole moment like carbon tetrachloride CCl4 or carbondisulfide CS2 show a similar bend and therefore this mechanism have to be discarded too.

3. A third explanation is based on intrinsic autoionization of water or eventualy of other ionised species present in water.

For this equation, the equilibrium constant is

On the other hand, if in experiment a quite saturated sodium chloride solution is used, the concentration of charges is very different. Sodium chloride has a solutility of 35.7 grams in 100 cm3 of water and let us suppose we prepare a solution of 5mol/L (it is close to the saturation). In such solution as far all sodium and chlorine species are presents as ions, the concentration of positive and negative charges is:

From reasons easy to be understood, we can neglect the contribution brought by intrinsic autoionization of water.

Of course, the experiment can be repeated with sodium nitrate which have a solubility of about 921 g in one liter of water and the result is the same....

Other posibility is to use organic solvents like isopropanol, butanol or even aprotic solvents like benzene, THF, etc,. The effect remains the same, even some of these solvents do not liberate any charges through autoionization and other have a constant of ionization of about 10-25 or even lower.

So, in conclusion we do not have a consistent explanation for this simple liquid bend of fluids in actual science.

I made this introduction because the new effect is linked to these old fashioned experiments.

The experiment is of elementary level and for the experiment a van der Graaf or other electrostatic machine is necessary. Some fluids with or without dipolemoment, with or without autoionization like: water, alcohol, isopropanol, cooking oil, benzene, THF, oil,carbon tetrachloride CCl4 or carbondisulfide CS2 are necessary.

The set up of experiment is presented in fig 1, with the specification that fluid container is supended and has the possibility of free rotation; also there is no direct contact between conductors coming from alectrostatic device and the container with fluid. Normally a container of 50 or 100 ml of volume will suit better for a small electrostatic device.

The experiment is very simple: fill in the container with a liquid, start the electrostatic device and wait a little .... 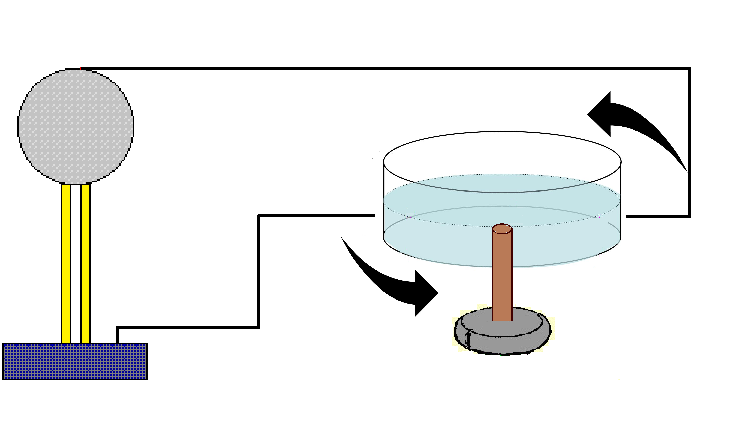 After few decades of seconds, depending on the size of electrostatic field generated, the fluid starts to rotate.

With any of the up remindend fluids, there is the same movement of rotation. Of course for some liquids dependig on their internal structure a stronger or weeker electrostatic field is necessary. But the effect has something to do with the ,,fluid state of matter" and not with ,,charge" present in solution or with the dipolemoment of the fluid.

Here you have a video with the experiment ...to upload..

I will leave for the actual theoreticiens the pleasure to explain the effect in the actual electromagnetism or maybe using the tunnel effect from quantum mechanic....