2.5 OTHER LIFTS EXPERIMENT AND EQUIVALENCE PRINCIPLE

Background and actual explanation
The equivalence principle: to an observer inside the elevator, without possibility to observe the external world, there is no physical experiment that it could be performed to differentiate between an gravitational field and an accelerated motion.
Working with light is quite difficult because its high speed. The original Einstein experiment can be performed, but requires a special attention and enough amount of money. In order to convince anyone about absurdities of actual general relativity, simple experiments, able to be interpreted even by unskilled people are developed.

first experiment
Two lifts one situated in gravitational field and another one in an acceleration field are considered like in fig. 2.9. 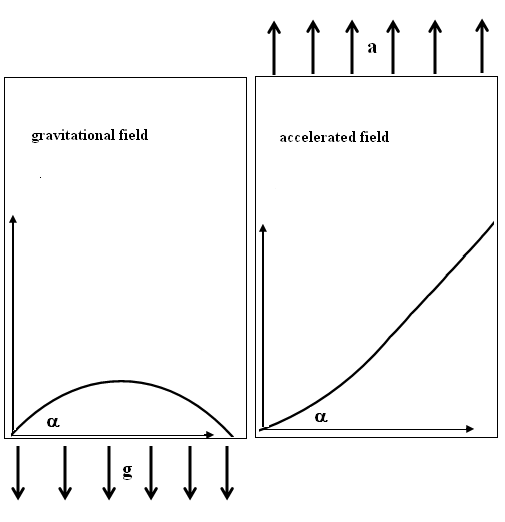 On every lift a golf player having a device for ball throwing is considered.
In case of gravitational field when the device throws the ball with an angle α, the trajectory of ball is a known parabola. After the y axis the ball moves for a time upward and after that downwards related to the floor of lift considered as reference.
In second case, when the machine throws the ball with the same angle α, the trajectory of ball is always upwards. The observer having already an idea of the place where the ball must fall will observe the curios trajectory of ball. Without applying any mathematical formula he will deduce a simple and logical conclusion. There is a fundamental difference between a gravitational field and an acceleration field and is impossible to have an equivalence of them. It is possible in some cases to have the same effect in both cases, but theoretically an infinity of causes can produce the same effect.

second experiment
The same frame with two lifts is considered like in fig 2.10 but in every lift there is a hunter having a fire arm and there is a possibility to measure the impact energy of bullets.
In every case, for every lift, the hunter will measure this impact energy for a horizontal bullet (E1) and for a vertical bullet (E2).
After that, the observer from every lift, compare the impact energy of bullets thrown in vertical direction with the energy for a bullet thrown in horizontal direction.
Based on difference E2-E1 in gravitational field and the different from E2-E1 in case of an acceleration field (depending on the nature of accelerated field) one can assume in which field is situated.

Again there is impossible to make the assumption of equivalence between an accelerated field and a gravitational filed. 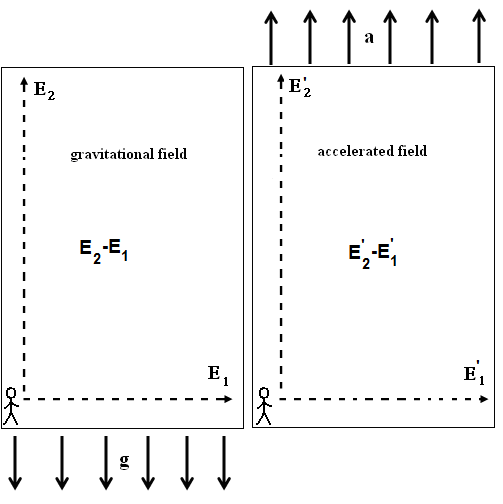