A simple electric circuit like in fig. 1 is formed. Some common materials are necessary: an micro ammeter, some conductors, batteries of 1,5 V and 9 V.

For the purpose of experiment a small quantity of pure iodine (reagent degree at least) and some graphite electrodes are necessary. It is not recommended to perform this experiment home, or if it is made, a chemist is absolutely necessary. In a closed recipient, about 5 g of iodine are introduced. Two graphite electrodes are inserted into solid iodine and after that connected to external circuit. 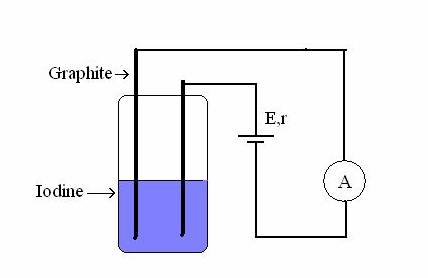 Figure 1. Scheme of the experimental part

The iodine is warmed up with care using an electric source until melts (the temperature must be maintained below 150 ºC)  and the electric current into circuit is measured.

At beginning, when a battery of 1,5 V is used as source, having solid iodine inside container the measured current is null. During heating, an increasing current from 0 to a maxim of about 35 μA is observed into circuit when the iodine is completely melted and distance between graphite electrodes is about 10 mm.

When the heating source is removed, a curious effect is observed, at iodine solidification maintaining the graphite electrode inside iodine. A electric current of about 0,05 μA continue to flow into circuit even when iodine becomes solid.

The effect is small and it can pass unobserved, therefore some adjustments are necessary in order to be highlighted.

If a pico ammeter-electrometer is available, the micro ammeter is substituted with latest and the current is measured with increased precision. With my Keithley instrument, the measured current was 58 nA, maintaining the 1,5 V battery as power source. For unskilled people this can be a very small effect, but for specialists working in the field, a current of 10-12 A or even smaller is a countable and consistent current. It is impossible to ignore or to leave aside a current of 58 nA, with actual instrumentation.

For home experiment or for those unequipped with a pico ammeter, a powering source with a higher voltage and current can be used. From chemical point of view, no reactions are possible at electrodes. Of course the parameters of the source must be adjusted in order to not produce an electric discharge between graphite electrodes. In the simplest example, two commercial 9 V batteries can be connected in series or in parallel into circuit. With this improvement, the current into circuit, rise to a minim of 1 mA with batteries connected in series, the distance between electrodes being about 1 cm and the electrodes inserted on about 2 cm into iodine. In fig. 2, the details for my container are presented. I have used a small glass container, with a polyethylene tap, and the home made graphite electrodes are passed through holes made into polyethylene tap. In this case, the effect becomes countable even in case when low cost instruments are used.

A further improvement can be made if the iodine containing solid iodine is cooled at lower temperature. For this purpose a bath of ice and salt able to arrive at minus 15 ºC or a gas bottle (CO2 or N2) able to produce lower temperatures is useful.

Nice and simple experiment, easy to be performed in any undeveloped country, or in any low level laboratory. Can we interpret the results of this experiment in the frame of actual physics?

Generally speaking, covalent compounds are not good electric conductors. They are classified as semiconductors or insulators. The experiment was made with iodine, so the entire discussion focuses on this element and the explanation of his properties.

In the internet at following link:

Iodine is a nonmetallic, nearly black solid at room temperature and has a glittering crystalline appearance. The molecular lattice contains discrete diatomic molecules, which are also present in the molten and the gaseous states. Above 700 °C, dissociation into iodine atoms becomes appreciable.

Iodine has a moderate vapour pressure at room temperature and in an open vessel slowly sublimes to a deep violet vapour that is irritating to the eyes, nose, and throat. (Highly concentrated iodine is poisonous and may cause serious damage to skin and tissues.) For this reason, iodine is best weighed in a stoppered bottle; for the preparation of an aqueous solution, the bottle may contain a solution of potassium iodide, which considerably decreases the vapour pressure of iodine; a brown complex (triiodide) is readily formed:

Molten iodine may be used as a nonaqueous solvent for iodides. The electrical conductivity of molten iodine has in part been ascribed to the following self-ionization equilibrium:

I have found, in internet, other information relevant for the proposed experiment.

An abstract from a paper published in Physical Review, vol 45, Issue 11, 1934, by McLoed, J.H, entitled ,,The Absorption Spectrum of the Iodine Atom”:

The absorption spectrum of atomic iodine has been investigated in the spectral range λ2100 to 1400Å. The iodine was dissociated by heating to 1000°C. A hydrogen discharge tube or an iodinedischarge tube was used as the source of illumination. The former source revealed clearly that λ1830 and 1783Å are absorption lines. When light from a discharge in iodine was passed through the heated iodine the following lines were found to be weakened by absorption, λ1830, 1783, 1642, 1618, 1583, 1515, 1507 and 1422Å.

Where are the absurdities in actual explanation and in the cited texts?

It is the first time in the exact physics sciences (physics or chemistry) when a melting of a compound produces simultaneous self ionization.

Does this self ionization corresponds with reality or is correlated with other parameters like ionization potentials or emission spectra?

In any book with data about elements characteristics it can be found:

It is completely impossible for an iodine molecule to be ionized in a simple process of melting or evaporation with these ionization potentials.

By absurd, supposing that such process would take place a nice effect should appear when solid iodine is melted. As far ionization and recombination are in equilibrium, the molten iodine should emit light in a broad spectrum of energies (VIS, UV, X ray) and not only in IR. This is because during recombination process when ions extinction takes place, the jump of electrons between different levels of energies will generate a broad emission spectra as in fig. 3. 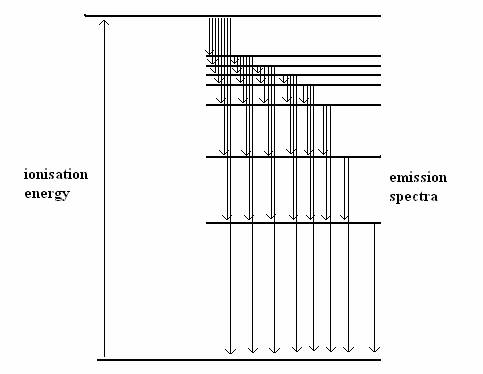 A simple calculation can demonstrate that in case of molten iodine, the number of photons emitted is so consistent that the effect should be observed with naked eye for visible spectra of light. Of course with actual instrumental techniques it should be a piece of cake to observe this effect in UV or other spectral domains.

Taking into consideration our case, for a current of 1 mA, it means each second a charge of about Q =It =1 mC is generated.

The number of charges (electrons and cations) should be:

Seeing such species concentration even for a layman a common sense question must get an answer.

In absence of an electric current what mechanism exists for this charge extinction?

Again when an electric current stop to flow where disappear these charges?

Is there a new mechanism of charge extinction in absence of recombination?

There is no VIS, UV, X ray spectra for a molten iodine solution and therefore the charge extinction cannot take place through recombination; with exception of an IR emission spectra characteristic to the temperature of melting process, no upper photons energies are ever emitted and therefore the ionization process during melting is pure imagination….

On the other hand, if an ionization process takes places during melting, the effect should be even more evident for evaporation, because the iodine molecules acquire even more energy. It is not a complicate problem to build a tube with iodine vapors at lower or higher pressure. Such tube should be able to work at any potential difference (even at 5 Volts), if iodine vapors are self ionized in great proportion and of course the current can pass through.

Again, the experimental reality is completely different from the absurd consequences resulted from actual interpretation. An iodine discharge tube needs quite the same potential difference like any other gas discharge tube and this difference is at least some hundreds of volts up to some kV depending on the tube length.

Las but not least, the electrical conductibility of solid iodine raises new challenges for actual theoreticians.

As was presented in experimental part, leaving the graphite electrode into iodine, when I2 become solid, the solid iodine is able to leave an electric current to pass through. According to actual theory it should be necessary to have a movement of charged particle inside iodine crystal in order to explain this comportment.

Let’s admit as possible this fact, but after few seconds, the charged particles extinct at graphite electrode and the electric current should stop to flow. In reality even after weeks, this small electric current still pass through solid iodine.

In this case it should be admitted that at ambient temperature, and in absence of melting, iodine molecule dissociate in ions. Can a common mind believe this self ionization?

If someone still believes as possible this, let’s freeze the iodine at -40º C and let’s increase the voltage to 20 or 30 Volts. The conductibility is still there present, even the actual theory can’t explain it.