Background of experiment
Ampere experiments show that magnetic force between two parallel conductors has the form:
(2.1)

where: I1, I2 are the currents in the two wires, r the distance between conductors, and l represent the length of conductor participating to the magnetic interaction.
On experimental basis Ampere makes the following observations:
• Parallel conductors carrying currents in the same direction attract each other;
• Parallel conductors carrying current in opposite directions repel each other.
Classical electrodynamics it’s not able to give an explanation for this experimental reality. The theory of special relativity considers magnetism as an effect of moving charge.

The experiment consists in two conductors with opposite and equal electric currents interacting magnetically on a small portion like in fig. 2.1. Relative to the first conductor considered fixed, the second conductor must have a possibility to be dragged mechanically, with a variable, but small velocity V– up to 10 cm/s.
For simplicity let’s consider I1=I2, and when both conductor are stationary a repelling force is observed and measured.
In the second step, the second conductor is dragged to the left with a small speed V– up to 10 cm/s.
At this speed, experimentally is observed, that the repelling force between conductors remain the same like in case of stationary conductors. 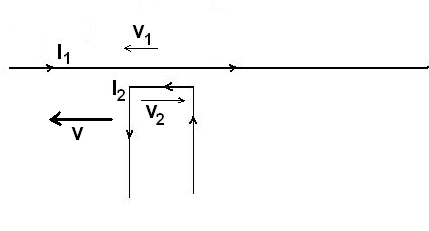 Let’s increase a little bit the dragging speed up to m/s or hundred of m/s; strangely, the results of experiment are the same, more precisely a repelling force between conductors.

A cornerstone of theory of special relativity is represented by the explanation of magnetic effects of electric current. According to this, the electric current in the conductors are manifested by the flow of electrons, against a background of stationary ions. The actual effective speed of an individual electron is only about 1 mm/s. However, there are about Avogadro's number of electrons flowing per cubic centimeter of conductor. The overall relativistic effect is therefore quite large.
Without entering in mathematical treatment, the physical model for electric currents interaction according to special theory of relativity is following:
In case of two equal currents flowing in the same direction, the electrons are moving with same speeds in both conductors, in same direction (opposite to the electric current formal direction), and these electrons appear stationary relative to each other like in fig 2.2. For the purpose of proposed experiment, it is not important to describe the Lorentz contraction and how a moving electron feels the field of stationary nucleus. 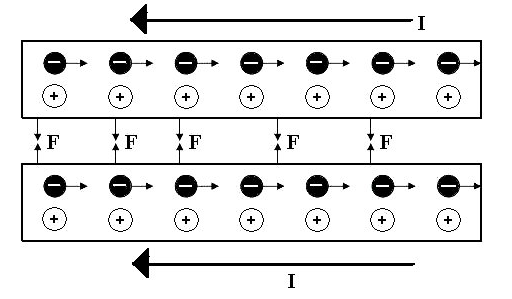 In case of two equal and opposite currents, the electrons are moving in opposite direction like in fig. 2.3 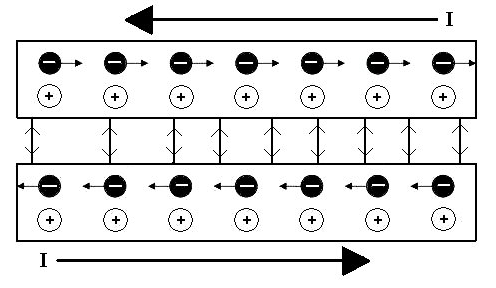 Figure 2.3 Magnetic interactions between two currents with opposite direction

What should happened in our experiment with two opposite currents, when the secondary conductor is dragged manually with a speed up to 10 cm/s (in reality after relativistic formulas, the effect should appear at a speed of dragging of 2 mm/s)?
When dragging speed V=0 and both conductor are static, normally Ampere force is measured between conductors; in this particular case with actual orientation of electric currents a repelling force is measured.
When secondary conductor is dragged with a variable and increasing speed some particular phenomena should appear, according to actual electrodynamics.
With v1 and v2 are indicated the velocity of electrons in the conductors and for I1=I2 there is v1= v2 as value and opposite as direction.
In order to have an intuitive and simple to interpret image of phenomena only the case of V = 2v2 is analyzed.
When V = 2v2 and opposite as sign like in fig 2.1, the velocity of electrons in conductor 2 becomes the same as value and sign like in conductor 1, and in this case, the electrons from both conductors become stationary.
But if the electrons are stationary relative to each others in both conductors, this lead to a change of sign of force between conductors. So with a simple dragging of a conductor at relative low velocity (after special theory of relativity about 2 mm/s, but let’s say maximum 10 cm/s) the magnetic force must change significantly as value and sign.
In reality this effect is not observed, so the idea of electric current generated by a charge movement and also the relativistic interpretation of magnetic effects as a consequence of moving charge are false.
The value of a theory is proportional with the cost of experiments necessary to disprove it and anyone can appreciate the cost of up proposed experiment.

A theory of relativity has nothing to do with base ground of magnetism phenomena.
As was already presented in atomic book structure, electric current and magnetism are phenomena related to the electrons magnetic moments and not to charge movements. The secondary flux of electrons appearing in a circuit contributes to the resistivity of the conductor and other secondary effects.
Of course two observers in different referential will see different value for the interaction between two conductors and this represent an application of relativity. But, in proposed theory both observer see the same phenomena more precisely a magnetic interaction.