The idea of this experiment:
Can we modulate electric currents or light in the same manner like electromagnetic waves?
For low level electronics, there are well known the modulation techniques of electromagnetic waves: AM, FM and PM.
Radio transmissions, for example, are a combination of two kinds of waves: audio frequency waves that represent the sounds being transmitted and radio frequency wave which represents the "carrier" of information.
Amplitude modulation (AM) is a technique used in electronic communication, most commonly for transmitting information via a radio carrier wave.
In AM (amplitude modulation) the amplitude of a carrier wave is changed in accordance with modulating wave as in fig. 1. A modulating wave with greater amplitude in AM will lead to greater changes in amplitude of modulated wave. 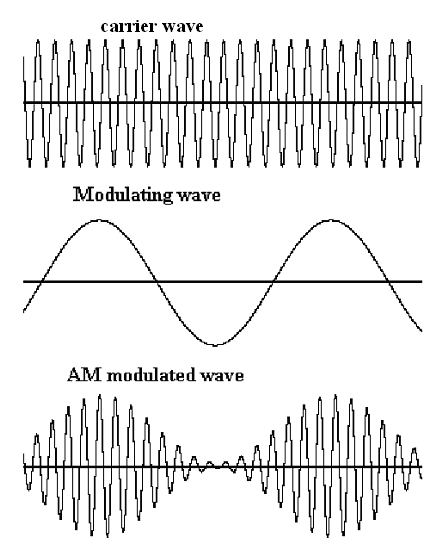 In its basic form, amplitude modulation produces a signal with power concentrated at the carrier frequency (fc) and in two adjacent sidebands like in fig 2. Each sideband is equal in bandwidth to that of the modulating signal and is a mirror image of the other. Amplitude modulation that results in two sidebands and a carrier is often called double sideband amplitude modulation. This kind of AM used at the beginnings is inefficient in terms of power usage because a lot of energy is wasted. About two-thirds of the power is concentrated in the central carrier signal, which carries no useful information and only one third is split between two identical sidebands. 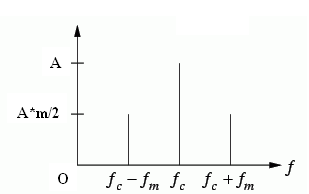 Figure 2. AM spectrum obtained from a sinusoidal carrier and modulating waveforms

To increase transmitter efficiency, the carrier can be suppressed from the AM signal and this produces a reduced-carrier transmission. A suppressed-carrier amplitude modulation scheme is three times more power-efficient than traditional AM. This form of modulations needs a carrier regeneration using a beat frequency oscillator in the demodulation process.

Even greater efficiency is achieved, by completely suppressing both the carrier and one of the sidebands. This is single-sideband modulation, widely used in amateur radio due to its efficient use of both power and bandwidth.
In its basic form, amplitude modulation produces a signal with power concentrated at the carrier frequency and in two adjacent sidebands. Each sideband is equal in bandwidth to that of the modulating signal and is a mirror image of the other. Thus, most of the power output by an AM transmitter is effectively wasted: half the power is concentrated at the carrier frequency, which carries no useful information (beyond the fact that a signal is present); the remaining power is split between two identical sidebands, only one of which is needed.
In FM (frequency modulation) the frequency of the carrier wave is modified by modulating wave, while the height (amplitude) of the wave remains constant (fig. 3). 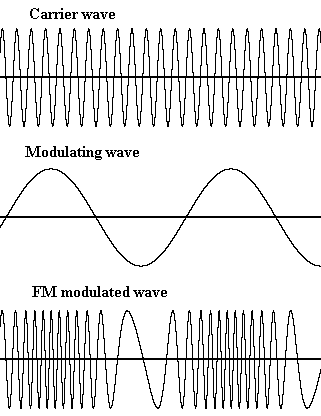 In frequency modulation the instantaneous frequency is linearly proportional to the magnitude of the modulating wave. A modulating wave with greater amplitude in FM will lead to a greater change in frequency of modulated wave.
FM is commonly used at VHF radio frequencies for high-fidelity broadcasts of signals.
PM (Phase Modulation) means to vary the angle of a wave in a carrier in order to transmit analog or digital data. For digital signals, phase modulation (PM) is widely used in conjunction with amplitude modulation (AM).
Normally, if light (IR, UV, VIS, Xray) or an electric current (continous or alternating) are considered particular cases of electromagnetic waves, and are described by the same set of equations (Maxwell equation), it should be expected to observe a similar comportment more precisely, AM, FM, PM.
In reality, it is and it will be impossible to have an AM, FM, PM phenomena using electric current and light as carrier instead of electromagnetic waves. This is due to the fact that electric currents and light are different ,,in principle" from electromagnetic waves. These aspects will be treated in detail in a further book.
In some books about electronics it is considered the Morse code transmission like an AM form of modulation. But is it really a modulation?
In Morse code transmission only the carrier is used and using an on-off switch binary data transmitted is represented as the presence or absence of a carrier wave. The real ,,modulation" implies a overlapping of two signals, which is not the case for Morse transmission.
The same false idea is to consider AM as being used in telephony transmission of voice as is actually presented. Actually is considered that, the voice waves are modulating the ,,voltage of the direct current loop connected" to circuit. But this is not an AM modulation, this means simply that electric current generated by microphone is added or subtracted from electric current of circuit loop. It is absurd to consider this a modulation because, in this case is denied the Kirchhoff's Current Law.
When using a electric circuit or a morse transmission it will be possible to transmit in a single lateral band (AM derivation), or it will be possible to suppress the carrier, or it will be possible to have phase modulation or frequency modulation, in this case the phenomena can be associated. But it is an it will be impossible to obtain this experimental facts.
The same consideration will be developed in this book for light ,,modulation’’.
If someone asks a radio amateur about quantum hypothesis and how this applies to radio transmission will think about you: poor boy.... In practice, the quanta hypothesis does not play any significance in wave theory starting from sound and finishing with electromagnetic waves.
Coming back to the original up formulated question, the answer can be only:
It is impossible to modulate electric currents or light in the same manner like electromagnetic waves, because electromagnetic waves are different from both electric currents and light corpuscles