It is assumed by actual physics that population inversion corroborate with stimulated emission represents the fundament of masers and lasers working principle. The detailed presentation of masers will be made in Electric currents and Electromagnetic waves book. The present discussion focuses on ammonia and hydrogen masers and consequences of actual interpretation. These particular cases are known as masers with molecular fascicle which use gradients of electric or magnetic fields in order to achieve population inversion.
The first population inversion was achieved in the ammonia molecule, which has an pyramidal form as is presented in fig. 1., with three hydrogen atoms forming the base and nitrogen atom situated in the head of pyramid.
According to quantum mechanic, the nitrogen atom can oscillate perpendicular on the plane of the hydrogen atoms. As result of this oscillation the ammonia molecule can have two different configurations. If the curve of potential energy between the nitrogen atom and plane of hydrogen atoms is figured, two minima are obtained (fig. 1), corresponding to the nitrogen atom equilibrium position related to the hydrogen atoms plane. 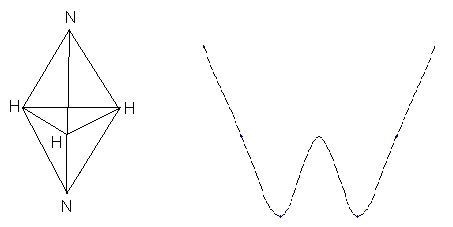 For those interested, there is a detailed quantum description of these states of ammonia molecule in Feynman lecture, vol III. From practical point of view, it is important to highlight the existence of two states and the possibility of ammonia molecule to emit electromagnetic radiation when passes from upper level to low level.
Population inversion is established by physical separation of molecules in the upper quantum state from those in the lower quantum state. Therefore, a beam of ammonia molecules is passed through a system of focusing electrodes which generate a homogenous quadrupolar electrostatic field in the direction of the beam. Molecules in the lower quantum state experience an outward force and rapidly leave the beam and those in the upper quantum state are focused radial (inward) and enter into the cavity resonator. When microwave power of the appropriate resonant frequency is passed through the cavity, amplification occurs due to the population inversion. If the output power emitted is sufficiently large, self-sustained oscillations results.
The emission of electromagnetic waves by ammonia molecule is explained ,,as result of nitrogen atom oscillation through the plane of hydrogen atoms", and the molecule switch from the upper level to the lower level of energy.
The hydrogen maser works after a quite similar principle. A fascicle of hydrogen molecule is dissociated to hydrogen atoms and these atoms are directed into an inhomogeneous hexapole magnetic field and only atoms in certain energy states can pass through. Further the atoms enter into a resonant cavity and when an external resonant energy is provided, excited atoms drops on the lower energy level, releasing the photons of microwave frequency. These photons stimulate other atoms to drop their energy level, and they in turn release additional photons and in certain conditions a self-sustaining microwave is appearing.
According to quantum mechanic, the hydrogen maser utilizes a transition between two ground state level (F=1, mF =0) and (F=0, mF =0) of atomic hydrogen, with a frequency of 1,42GHz
For hydrogen atom these transitions ,,means a flip of electron magnetic moment as is figured" in fig 2. 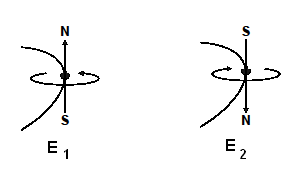 Figure 2. States of hydrogen atoms according to quantum mechanics

As result of these flip the microwave radiation is released in conformity with Planck equation.

Why the actual explanation is absurd…..

It is necessary in a first step to evaluate the effects of a quite equal microwave energy frequency in the up presented cases.
In case of hydrogen atom the microwaves produce only a flip of electron magnetic moment as in fig. 2; the electron during and after this interaction continue to move around nucleus. The microwave radiation is not strong enough to move the electron from its orbit or to break the interaction between nucleus and electron.
But what’s happened in case of ammonia molecule?
Quite the same microwave frequency produces an unimaginable result. An entire atom (electrons and nucleus) is pushed from a position to another position as indicate in fig 3. 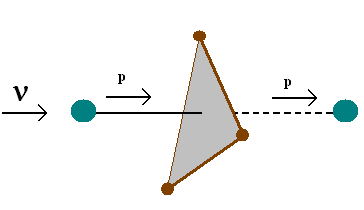 As is shown in fig. 3 as result of microwave energy with frequency ν, the nitrogen atom should receive a momentum great enough, and as result of this gain, it will pass through hydrogen atoms in a symmetrical position, on the other face of hydrogen atoms plane.
It is possible to accept as ,,real" this nitrogen atom change of position?
If we keep the proportion and translate the phenomena to the real world it is similar to saying that a fly knock a car and the car is forced to leave the road.
If a correlation between effects of microwaves and X-ray photons is made, other vexatious problems appear looking in the frame of quantum mechanics.
An X-ray photon is able to liberate electrons from a material. Why X-ray is not able to liberate an entire nucleus? Why a microwave field is able to move an atom but is not able to liberate an electron from a material?
If a microwave is able to move an atom, it should be observed how an X-ray or gamma ray, with a greater energy, should expel an entire nucleus.
The answer is very simple: an X-ray does not have enough energy to do this job.
On the other hand, does anyone asks how is possible for an atom (with its layers of electrons) to jump in a ,,single quantum" step from one position to another position? For a simple electron, when make a jump between two layers it can be admitted, according to quantum mechanic, the single step movement. For an entire atom it is quite impossible to have a single step process. Up to date, there are no scientific texts which treat in detail this subject – quantum atomic jump – so the quantum theoreticians can use their imagination in order to fill this void.
In proposed theory as was already highlighted the quantum hypothesis is ruled out. In the same time there is a correlation between energy of incident radiation (electromagnetic waves or corpuscular photons) and the observed effects.
In proposed theory there is a completely different approach of microwave–matter interaction; the subject will be detailed in Electromagnetic wave and electric currents book.
In an appropriate microwave field (resonance condition must be fulfilled), a flip of spin electron magnetic moment can explain the observed phenomena.

The movement of electron outside its orbit or the movement of an entire atom as result of microwave-matter interaction is to fantasist to be real; in proposed theory this possibility is eliminated.