For the moment only the Romanian version is available at:

As soon as possible the translation of this material in other languages will be provided too.

Please revisit the site in the following weeks….

The current
The sun is the closest star to Earth. Although for us it seems something extraordinary scale, the Sun is considered a celestial body banal, part of G2V spectral class, the class that includes other about 100 billion stars just in our galaxy.
As the chemical composition, the Sun is composed of 75% hydrogen and 25% helium by mass. Other chemicals found in tiny proportions (approx. 0.1% by mass). Because of this composition, the sun ,, there is a solid crust and no liquid matter, "all matter is entirely solar gas.
In accordance with current theoretical model, the Sun is a huge mass of ionized gas that produces energy by nuclear fusion reactions taking place somewhere in the nucleus or core. It is believed that the solar core temperature is about 15 million degrees and pressures around 250 billion atmospheres. The area where nuclear reactions produce these represent only a quarter of the radius of the Sun, but it stores about half of its mass.
Following fusion reaction, hydrogen nuclei are converted into helium emission of huge amounts of energy in the form of gamma photons. On its way to the surface, these photons are absorbed and re-emitted continuously at temperatures increasingly lower, so that their energy level is already in the visible photosphere.
Solar radiative zone around the core, is distinguished by a strong decrease in the density and pressure and temperatures drop to values ​​of the order of one million Kelvin. Outside the radiative zone have a convection zone where the transmission power being made as the photosphere convection currents.
Characteristic G2V stars, photosphere has a temperature of approx. 5800 K.
Seen through the telescope, the photosphere is presented as a network of granules, which are in a constant agitation that come and go in minutes. In some places, the Sun has some dark spots called sunspots, which were very studied after the invention of the telescope and telescope. Sunspots are dark matter regions because they are "cool" regions, only 3500-4000 K, and that less warm than the surrounding regions. They are often associated in pairs, which acts as a huge magnet poles. May remain visible for several weeks. The number of spots can be observed on the Sun varies by a cycle of about 11 years.
The cause of sunspots is not known at present. It is estimated that a sunspot formation plays an important role general magnetic field of the sun. Thus locally strong magnetic fields causing the sunspot. Magnetic fields are already appearing in the stage preceding the actual formation of sunspots. These fields difficult to surface eruption of hot gases. This could explain the low temperature observed in sunspots.
The most common stains are stains bipolar groups or associations as chains spots. These spots are usually located parallel groups with latitude, which presents the eastern and western ends opposite magnetic polarity. After a 11-year cycle, sunspots change polarity.

The explanation proposed
Although the topic is not directly related to electricity or magnetism, the whole explanation of the formation of sunspots can build a new theory postulated magneticităţii which will be detailed in the book Magneticitatea.

A first finding that emerges from this postulate is represented by the impossibility of a gaseous body to have a macroscopic magnetic field independently. Even if this matter is as celestial body plasma (ionized gas), it is possible that self-organization of matter and macroscopic thermal movements simultaneously with gas so that we have generated a magnetic field independently. Experiments plasma in toroidal systems or spheroidal can show that we can confine, that limit movement of the plasma in a certain volume and that.
Consequently the current star pattern, the material is in the form of ionized gas is pure nonsense and a rational science should do everything possible to avoid it. In 1994, almost two decades ago, I tried to publish a new theory of gravity based on fluid mechanics. Although the theory was able to provide a rational explanation for a lot of current physics enigmas such as: temperature of 1.5 million degrees in the solar atmosphere, accelerating gas in cometary tails proportional to the molar volume (22.4), etc. both NASA, ESA, and scientific journals were not interested in publishing or her application.
From that theory lacked a stellar model, explaining the operation of a star at least and possibly its evolution. Accordingly, this and future studies will focus on certain aspects stellar curious, which are already known experimental level but are either misinterpreted or already forgotten in a drawer dusty.
Certainly stellar model is proposed based on the axiom that the Sun is a body fluid. We do not know exactly what is happening in the heart of this celestial body, but from what we see on the surface, we believe that is a boiling cauldron, which sometimes has a quiet boil turbulent times. It remains to see if fluid mechanics in its classical form is quite suitable to describe the movements that we see on the surface of the star or you suppose to take place inside or need some amendments.
Not applicable to repeat here, as I looked at the Earth's magnetic field, that the motion of matter inside the ionized form of a celestial body is not compatible with the existence of a magnetic field it self-sustaining.
Therefore, the proposed model, the Sun contains hydrogen and helium in liquid form and at a temperature above 5800 K, the temperature increasing towards the core of the sun. Even the stellar core, where fusion reactions take place, we can not admit that consists only of positive nuclei and electrons that without the immediate vicinity. A temperature of 15 million Kelvin, is unable to ensure the stability of nuclear matter in the absence of electrons in the stellar core.

The simplest problem still remained unsolved and already forgotten by modern astronomy is ,, curious "correlation between solar activity and sunshine (or solar constant). Although sunspots have a temperature ,, "lower than the average photosphere and we expect an increased number of sunspots lead to a decrease in the sunshine, the situation is exactly the contrary. The more sunspots have the sunshine, and thus the amount of energy radiated by the Sun is higher.
The current explanation for limiting movement ,, hot gases "in ,, some magnetic fields" made without a rational explanation, is directly contradicted by experimental observations. Thus sunspots are directly related to the type convective movements that occur in the photosphere, and there are studies that show that these spots have cone with the tip pointing towards the interior of the sun.
The proposed theory sunspots are a manifestation of a more precise activities of the Sun turbulent turbulent boiling. Even if the sunspots, the emission is reduced due to convective motions, the amount of heat which is measured by an observer on Earth must be greater overall than if a gentle boiling.
Consequently, more sunspots, more energy radiated into space as a whole. Certainly during boiling turbulence, besides the form of radiation energy boiler (sun) throws and drops (ie solar material). It is already a fact found experimentally that the area immediately adjacent a sunspot photosphere has a far superior shine ...
In theory proposed sunspot temperature can not be of the order of 3500-4000 K. This is only apparent effect. As in the sunspot, the emission energy is much diminished, for a distant observer measuring the temperature on the energy emitted per unit area, that area will appear with a lower temperature. But the concept of temperature can we apply it to caracateriza this? The temperature of a sunspot defined by the amount of energy emitted per unit area? And if for some reason can not emit photons region? Perhaps in this case the temperature of the sunspot is at least equal to or even greater than the photosphere and the emission is increased in the vicinity of sunspots.
Even in light of modern science, to accept that sunspot temperature is lower than the photosphere appears as an absurdity. Since sunspots are movements of matter coming from the convection zone of the Sun, it is impossible for the matter to have temperatures of 3800 K.

Another problem remained unsolved for current physicists is the magnetic field strength at the sunspot. For current information, the magnetic field in the photosphere general calm is about one Gauss, about twice the magnetic field is measured at the Earth's surface.
However, it is possible that the level of sunspot magnetic fields have values ​​between 2500-3500 Gauss environments that can sometimes reach 5000 Gauss? Current science is unable to provide a satisfactory answer. The subject is completely avoided physical or theoretical treaties, for the simple reason that no one could imagine a mechanism to ensure the formation of such magnetic fields.
Apparently, an ionized medium, the particles have freedom of movement, as assumed current science could justify a random agglomeration of tasks the same way and their flow for a short time. But such a random agglomeration could generate, if we give a generous estimate, a magnetic field of a few gauss. To explain the formation of a magnetic field of several thousand gauss and persist for months, you have to be a cause and a specific mechanism. Or something like that does not exist and can not be formulated in modern science.
Another curiosity that often is not even mentioned in the scientific reference texts, but is known for centuries, is the drift of sunspots during a half-11-year solar cycle (Fig. 1). Thus, at the beginning of the solar cycle, the spots appear at high latitudes 40-50 °, sometimes even 60 °, and measure the passage of time, the spots are formed at latitudes increasingly smaller near the equator solar; rarely form below 5 ° latitude sunspots. So basically we have a preferred area of ​​sunspot formation between 5 ° and 40 ° latitude.

Figure 2. The appearance of local magnetic fields as a result of fragmentation of the convection cells.

After a semicircle of 11 years, matter changes its direction of rotation in the convection cells that form at high latitudes. When these cells move towards the equator and fragments, magnetic fields are formed in opposite orientations (Fig. 3) than those generated in the previous semiciclul.

Figure 3. Changing the polarity sunspot after a semicircle 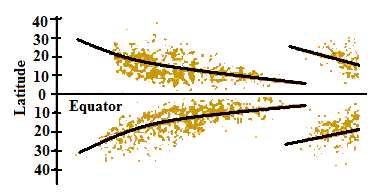 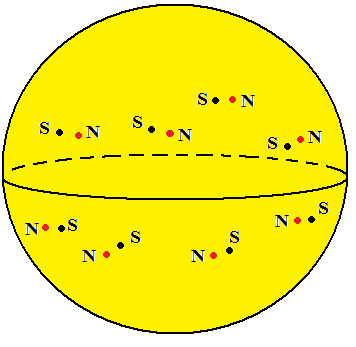 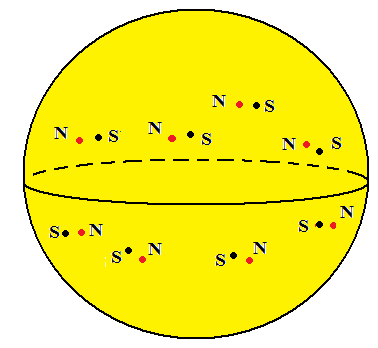