The old version of this article was advertised few years ago (2009) and you can still find this article here.

Van de Graaff device (VDG) represents a common subject for any low level or advanced physic book. A VDG generator is a device designed to create static electricity and make it available for experimentation. There are two variants of VDG, with or without potential applied on second brush.

Even is a common instrument, the explanation of charge generation does not have a unitary treatment and differs from book to book. For the VDG without supplementary applied potential, as reference, the Berkeley course (vol II - Electricity and Magnetism) is used. For VDG with potential applied on a brush, the book ,,Current, Fields and Particles” by Francis Bitter, John Wiley and Sons, 1960, New York, is used as reference.

In a common VDG device (fig. 1), a belt of silk, or another similar flexible dielectric material, is running over two pulleys, one of which is surrounded by a hollow metal sphere. Small size devices usually have a latex belt which can roll over a felt covered pulley.

Two electrodes in the form of comb-shaped rows of sharp metal points, are positioned respectively near to the pulleys. One electrode is connected to the sphere, and the other to a null point or to another smaller sphere. The explanation for this VDG device in Berkeley course is so vague and philosophical and has nothing to do with experimental reality.

In other texts the following explanation is provided:

When the motor is turned on, the lower roller (charger) begins turning the belt. Due to the different materials of belt and roller, the lower roller begins to build a negative charge and the belt builds a positive charge. The belt is positively charged and rolling toward the upper roller and upper brush assembly. The electrons in the brush move to the tips of the wires because they are attracted to the positively charged belt. Once the air breaks down, the sphere becomes positively charged. For the VDG generator, the belt is the charged object, delivering a continuous (positive) charge to the sphere.

More elaborated VDG device, use a high potential (positive or negative), of about 15-20 kV, applied on the lower brush as in fig. 2. The actual explanation: if a high potential (15-20 kV) is applied on lower brush, the air around brush becomes ionized and the charge is injected onto the belt, which then carries them up and inside the sphere.

In the internet I have found quite a similar explanation for such modified VDG device as follows:

A simple Van de Graaff generator consists of a belt of silk running over two pulleys, one of which is surrounded by a hollow metal sphere. Two electrodes, E1 and E2, in the form of sharply pointed cones are positioned respectively near to the bottom of the pulley and inside the sphere. E2 is connected to the sphere, and E1 is made 10,000 volts positive with respect to earth.

Why the actual explanations are absurd?

It is accepted that Van De Graaff generator works simply on the principle of triboelectricity. When two materials are rubbed or come into contact together, an ,,exchange of electrons” can take place depending on their triboelectric properties. When such a transfer occurs, the material that lost electrons will become positively charged and the one that gained electrons becomes negatively charged.

Triboelectricity is a material characteristic, this means each time when two material are rubbed or come into contact together, one of them will become ,,positive” and another ,,negative”. There are no technical possibilities to change the characteristics of a material and for example a nylon material rubbed over the same Teflon material to become today positively charged and tomorrow negatively charged.

It is a law of nature (and not explained yet !) that each time when  these two materials come into contact, each time the same type of ,,charges” appear  on one material  and opposite ,,charges “ on the other material.

Having this common sense idea in mind let us analyze again fig. 1 with actual explanation for Van der Graaff device (without charge injection).

Let us consider that pulleys are from Teflon and belt is from nylon.

The actual explanation of Van der Graaff device contradicts evidently what is known about triboelectric series and contact or induction electrification.

If the belt becomes positively charged as result of contact between nylon belt and lower teflon pulley, and of course these positive charges are collected on the bigger sphere, it is completely impossible that the same friction between upper teflon pulley and the nylon belt charges the belt with a negative charge. Either triboelectric knowledge either actual explanation for Van der Graaf device is a nonsense.

The van der Graaff comes into contradiction with what is known about electrification by contact or influence too.

In fig. 6, after contact, both bodies are charged with the same charge if they have the same dimensions and are made from the same material.

If these bodies are charged with the same type of charge, but in different amount (q and Q), when contact is made there is a transfer of charge from the greater to the smaller charged body.

It is a common sense rule, that in case of influence or direct bodies contact, it is impossible to transfer a same type of charge from a body carrying a smaller charge to another body carrying a greater charge (fig 4). Of course this rule can be demonstrated based on general analytical principle from physics.

According to this ,,common sense” phenomena of electrostatic, the sphere of VDG device should arrive in a ,,happy end” case to a maximum charge equal as value with charge produced by friction between two surface. The ,,charges” produced as result of friction depend on the contact surface and material type, but in any case this charge is small, on the order of nano coulombs scale.

As consequence, after few second of VDG working, the sphere should arrive, admitting a 100% transfer of charge (by induction or contact), to the same charge as the effective charge produced in friction between belt and roller as in fig. 13. 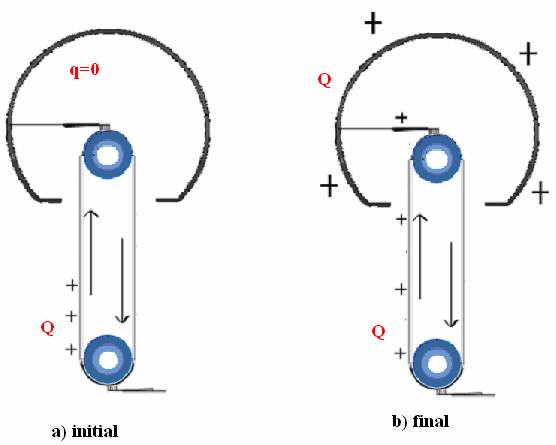 After that, even the belt continue to rotate, due to equality of charge, no transfer or no induction can take place, because it is impossible to mount a small charge over another greater charge. As consequence, actual electromagnetism foreseen a maximum charge of sphere up to hundreds of Volts and in case all these transfer or influence work with a 100% yields or for bigger size device, few thousands of Volts can appear ….

Do these actual predictions fit with experiments? I don’t think so......

If  the straightforward principle behind the VDG generator with charge injection is  related to a simple transport of charge injected on the belt, the same simple problem  must be solved: How is possible to charge the sphere to a potential greater then injection potential?

The up presented considerations are valid in this case too, so it is not the case to repeat them again.

Supplementary to these, for actual theoreticians a simple experiment can be performed.

Instead of spraying the charge on the belt, and after that the charge is again collected from the belt and moved on a sphere, a greater yield and a higher potential can be achieved if the sphere is removed from VDG and the charge is sprayed directly on the sphere as in fig. 14. The proposed explanation for VDG, described in the book, is not based on charge movement as far as no electric charges (free electrons or positive ions ) are usually generated by friction or contact.

An entire class of physics experiments (triboelectricty, electrostatic, etc) is provided with a new, simple and consistent explanation.