Electromagnetic waves are considered transverse waves in which the vibrations of electric and magnetic fields are perpendicular to each other and to the direction of propagation (fig.1). These two fields change with time and space in a sinusoid fashion.
Generally, only the electric field is represented, related to the propagation direction, because it is with the electric field that detectors (eye, photographic film, CCD, etc.) interact.

The polarization of an electromagnetic wave refers to the orientation of its electric field E. When the direction of electric field (E) is randomly varying with time on a very fast scale, related to the direction of propagation the wave is considered non polarized.
In case of a linearly polarized wave, the electric vector has a fixed orientation related to the propagation direction like in fig 2. 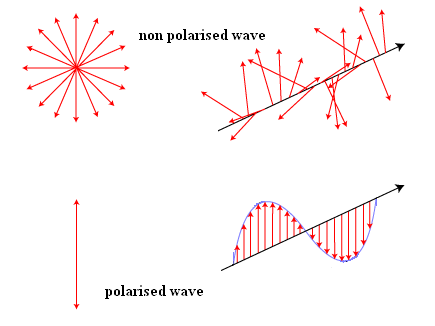 The polarization of electromagnetic wave can be produced by absorption, scattering, reflection and birefringence.
A linear polarizer is a device that only allows electric field components parallel to a certain direction (called the polarization axis) to pass through. Any electromagnetic wave that comes through such a polarizer is polarized in the direction of the polarization axis. After leaving the polarizer, the wave’s polarization (E-field direction) does not change, and the wave is considered to be linearly polarized.
If the linearly polarized light passes through a second polarizer, the transmitted intensity I(θ) of the waves as it leaves the second polarizer, is given by Malus’ Law.
The specific manner in which a beam of electromagnetic wave at a specific polarization is reflected (and refracted) at interface between two different media can be used to determine the refractive index of the solid.
Specifically, for a particular interface, there is a particular angle of incidence (relative to the normal vector of the surface), called the Brewster angle, which is related to the refractive index of a material. At this angle, the reflection coefficient of light polarized parallel to the plane of incidence is zero. Thus, if the incident light is non-polarized and impinges on the material at the Brewster angle, the light reflected from the solid will be polarized in the plane perpendicular to the plane of incidence. If the incident light is polarized parallel to the plane of incidence, the intensity of the reflected light will be theoretically zero at the Brewster angle.
The proposed experiment use the polarization by reflection due to its simplicity, but other polarization methods can be used too. 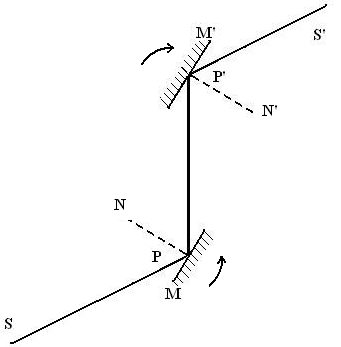 The experiments with visible light and mirrors were made more then one century ago, starting with Brewster and repeated in a lot of laboratories.
To date some experiments were made in order to check the phenomena for IR, and the effect can be accepted as valid for UV and gamma rays. Related to this kind of experiment, it is worth to be reminded a paper from 1969: Rotatable polarizers for the near infra-red, R M Lambert et al, J. Phys. E: Sci. Instrum. 2 799-801 doi: 10.1088/0022-3735/2/9/311.

For the proposed theory it is interested to check how this experiment works in microwaves or radio waves. It’s difficult to perform the experiment for long radio waves, but for microwave or terraherz domain, with wavelength of submillimeter or centimeter order it should not be insurmountable problems in repeating this kind of experiment.
In proposed theory there is a fundamental difference between electromagnetic waves and light.
For the beginning is necessary to highlight that the refractive index defined for light has no significance in case of microwave (by extension also to other radio waves).
It is worth to be reminded a study made by a team of Oklahoma University available at link: http://www.nhn.ou.edu/~johnson/Education/Juniorlab/Microwave/2003SP_MicrowaveOptics.ppt#27
In the experiment, the polarized microwaves reflected by a polyethylene foil are counted for different angle of incidence. They obtained maximum of reflection not for a single value of incidence angle but for more values. Their conclusion: We are unable to detect Brewster angle in proposed experiment.
The results obtained are without meaning in the frame of actual physics.
In proposed theory the refractive index is a characteristic of photons interaction with matter.
Electromagnetic wave interacts in a different way with matter. In case of electromagnetic waves, depending on the material, it is possible to have more then one maximum of reflection or to have no maxim at all.
Consequently, in a double mirror polarization device, using a microwave or a UHF radio source, when the second mirror is rotated, the intensity of microwave does not modify according to Malus law. It is possible for different angle to have more then expected maximum of reflected polarized microwave or to have no maximum and the conclusion is clear: radio wave does not follow the same rules like polarized photons (IR, VIS, UV etc) at reflection.
Using another method of polarization (absorption, scattering, birefringence) the same difference between light and electromagnetic waves should be obtained.
The experiment for UHF electromagnetic wave can be simplified a lot if instead of first polarizing mirror the effect of polarization due to specific antenna is used. The physical orientation of a wireless antenna corresponds to the polarization of the radio waves received or transmitted by that antenna. Thus, a vertical antenna receives and emits vertically polarized waves, and a horizontal antenna receives or emits horizontally polarized waves. For microwave a
Consequently for UHF, the polarized waves coming from a let’s say vertical antenna fall directly on a rotating mirror and according to actual interpretation at reflection should respect the Malus law. In reality the experiment leads to negative results in respect to this law, so again the supposition that light is an electromagnetic wave is baseless. 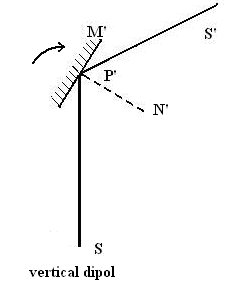 The detailed corpuscular interpretation of light polarization is presented in forward book.
The detailed analysis of electromagnetic waves interaction with matter will be analyzed in a further book related to electricity.