In 1922 Stern and Gerlach made an experiment with intention to verify the Bohr-Sommerfeld model of the atom by measuring the quantized states of angular momentum. According to Sommerfeld theory, the movement of electron around nucleus generates a magnetic moment linked to the angular moment.
In the theory of Bohr Sommerfeld the orbital momentum could take only discrete values, so the direction of the vector was restricted to only a limited number of possibilities, and this could be tested by making use of the fact that an orbiting electron will generate a magnetic moment proportional to the orbital angular momentum. Of course in the atom not only electrons have spin. The elements of the nucleus also have it. But protons and neutrons are much heavier than electrons (about 1836 times), and the magnetic dipole moment is inversely proportional to the mass. So the contribution of proton's and neutron's magnetic dipole momentum to atom total momentum is smaller comparatively with electron contribution.
The atoms of silver from the source, which was a furnace with boiling silver, were evaporated and passed through thin slides in order to obtain a flat beam of atoms.
The inhomogeneous magnetic field spreads the silver atoms along direction of inhomogeneous field, and these modifications are detected onto a screen (fig 1.4). A splitting of the beam, into two parts, one above and one below the original beam was observed. The geometry of the Stern-Gerlach magnet is such that the inhomogeneity is only in one direction (Bz varies with z), but is mostly independent of x and y. 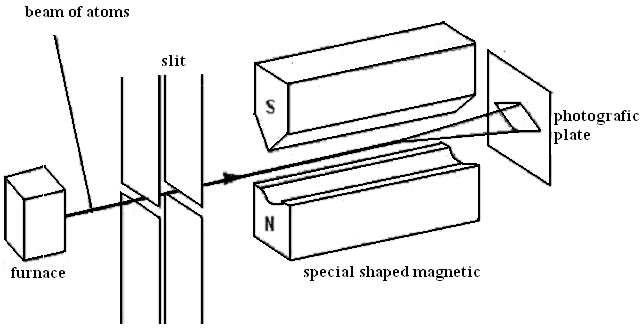 Ulterior experiments with other elements having approximately the same electronic configuration (hydrogen, potassium, cooper, gold, sodium etc.) conducted at similar results.
In the absence of magnetic field, the trajectory of atoms is a straight line and a spot is formed on the screen. In the presence of strong magnetic field a separation of these spot in a ,,eye form shape” is observed. In many books the result is presented like two parallel lines but this is incorrect.

The experiment refuted the expectations of Bohr Sommerfeld theory; according to quantum spin introduced by Sommerfeld three components must appear on the screen and this not happened.
The idea of electron spin was proposed later (1925) by Uhlembec and Goudsmith and the results of experiments were adapted to be explained in conformity with spin moment of electron. According to quantum mechanic the silver atom poses an electron on a last shell in 4d.
In atoms, internal electrons are located in such way that in the each pair of electrons there is one of the upward spin and one of the downward spin so on for a filled shell the whole spin of such pair is equal zero.
The remaining electron on the outer shell in the silver atom posses a spin which is not balanced by other electron. According to quantum mechanics for this unpaired electron orbital magnetic momentum is zero, and the magnetic moment of silver atom due to this outer electron is therefore attributable only to its spin.
The z-component of the spin angular momentum  is

(1.17)
In the same time (based on actual data!) the values for spin movement (both magnetic moment and angular moments) are supposed to be smaller then corresponding values for orbital movement.
The composition of magnetic moments for the same electron follows the classical rules of vectors so there is:

(1.21) is the potential energy of the silver atom in the magnetic field.

Different orientations of the magnetic moment vector μ will lead to different values of μz, which in turn will mean that there will be a forces acting on the atoms which will differ depending on the value of μz.
So the deflection of the electron on the screen is:

(1.21)
where L is the distance between magnet and screen, v is the velocity of atoms calculated according Maxwell Boltzman distribution.
For atomic moments orientated up the inhomogeneous magnetic field produce acceleration in the up direction, besides the precession in x-y plane. Consequently we will have a beam of atoms with intensity half from initial beam which is deviated up.
For atomic moments orientated down we will have a deviation in the down part of screen relative to the position of beam in absence of a magnetic field, and the intensity of fascicle is again half from the intensity of incident fascicle.
In the first case the atoms is forced to move up in the magnetic field and in the second case the atom is moving down.
The movement of atoms in SG experiment can be described in terms of classical physic being a composed movement due to the acceleration along z axis (positive or negative direction) and a precession movement of atomic moment in x-y plane 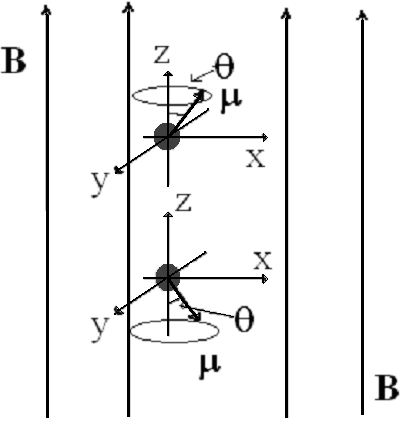 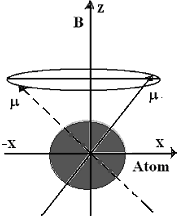