When heat energy is added or subtracted to a substance its temperature usually modify except when a change of phase occurs, more precisely, when solid is changed into a liquid phase or a liquid state is changed into its vapor phase and reciprocally. The change of phase occurs without increase or decrease in the substance's temperature. The thermal energy absorbed or emitted goes into changing the state of the matter involved. Conversely, during a phase change, latent heat or "enthalpy of transformation" must be released.
For our experiments are useful only the cases when a gas transform into a liquid or a liquid transforms into a solid and release in exterior latent heat.
According to Planck hypothesis and in conformity with blackbody radiation explanation all body at a temperature above 0ºK emit electromagnetic radiation.
For our experiments water and nitrogen and possibility to cool down this substances in order to obtain ice (0ºC) and liquid nitrogen (-210ºC) are necessary.
According to Wien displacement low, and in concordance with black body radiation for a temperature of 0 ºC (273K), respective -210ºC (73K), the maximum of absorption or emission of electromagnetic radiations are:
max(in meters) = 0.0029 / T (in Kelvin)

and frequency will be about 3 THz

and the frequency will be about 0,75 THz.

For the experiments a device similar to one presented in fig 1. is used. During the solidification of liquid water or liquefaction of nitrogen gas, the temperature of system is constant so a flux of ,,photons” with up presented frequency must be counted. The spectrum of radiation must be similar to an X-ray spectrum with at least one peak due to the phase transition as in fig. 2. We leave for a further experiment the infrared domain (right part of spectrum related to the peak in fig. 2), even is interesting what’s happened in this case, and only the radiation in microwave or radio wave is measured. The region of terahertz radiation is a new field of experimental exploration so a detector for up calculated frequencies is not easy available. Of course a high tech laboratory can find such device in order to plot the entire spectrum of electromagnetic radiation and to measure the maximum of peak for phase transition. But for a small laboratory and even at home, a detector of microwave radiation used for checking the leaks of microwave oven is quite satisfactory. As detector an oscillator circuit used to receive satellite TV signal, with small modification, can be used, too. 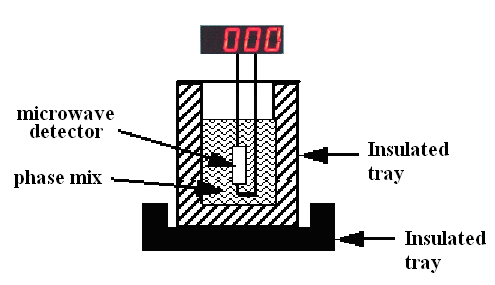 In our experiments, the spectrum of blackbody radiation should have a specific form as is plotted in fig. 2, and as is seen, when the maximum of radiation is in terahertz region, there is enough radiation for lower frequency able to give a signal in detector. The peak appearing in classical blackbody radiation is due to phase transition. The energy released in this process, is counted as a increased number of ,,photons” with the same energy, because the temperature during phase transition is constant.

Using a simple microwave detector or a satellite oscillate circuit, the measured signal will not fall at λmax, but let’s say at another frequency λmeas. The signal at this measured frequency is and should be enough to be registered by simple detectors. Of course advanced technology can measure directly the release energy at λmax or draw a spectra at different frequencies.
But the results are completely negative on the entire interval of actual radio and microwave electromagnetic waves.
Cooling a body, there is no emission of radio or micro waves and the comportment is similarly for a heated body from small temperature to high temperature.
Experimentally, up to a certain temperature, the transfer of energy is made by conduction, convection or contact, and after that by radiation. This radiation is formed only from photons which fall in IR, VIS, UV, etc. depending on the temperature.
By any kind of thermodynamic experiment it will be impossible to produce electromagnetic waves and this must be stated as a principle in physic. In order to obtain electromagnetic waves a oscilator is necessary.
The connection between quantum hypothesis and electromagnetic waves must be ruled out. The actual accepted idea that interstellar and galactic medium with a temperature of 2,7 K, has a maximum emission in microwave radiation is a fake, and the discussion was made in Relativity book.
With actual technique, it is very easy to cool down a body up to that temperature and to measure the microwave emission of such body, and of course the result will be negative.