Light pressure was accepted from long time in physics as an explanation for comet tails formation. Later Bartoli deduced the existence of light pressure from thermodynamic considerations and Maxwell predicted the value of light pressure from his theory of electromagnetic phenomena.
Scientists were making great efforts to measure the value of light pressure, at beginning without success. Besides its small value, there were other perturbing effects which have influence on the experiment. In fact the first explanation given by Crockes to its light mill invented device was wrong due to these errors.
Light mill consists of four vanes each of which is blackened on one side and silvered on the other. These are attached to the arms of a rotor which is balanced on a vertical support in such a way that it can turn with very little friction. The mechanism is encased inside a clear glass bulb which has been pumped out to a high, but not perfect, vacuum. When sunlight falls on the light-mill, the vanes turn with the black surfaces apparently being pushed away by the light.
Maxwell accepted the initial explanation of Crookes, that rotation is produced as result of radiation pressure as predicted by his theory of electromagnetism.
Soon was realised (Arthur Schuster) that mill is not rotating according to theory prediction, but in a contrary direction. Light falling on the black side should be absorbed, while light falling on the silver side of the vanes should be reflected. The net result should be twice much radiation pressure on the metal side as on the black.
Other explanations were proposed some of them explaining partially the overall effect. Working at atmospheric pressure, light used in experiment rise the temperature of material and surrounding air, too. As result of air heating, there is an air flow and this acts on the sheets like a blowing wind.
The non-uniform heating of the sheets, since the light shine only one side of the sheets, leads to different amounts of energy transfer to and up molecules of surrounded air.
Lebedev in 1901 managed to surpass these difficulties and to measure the pressure that light exerts on bodies. The main component of Lebedev's apparatus was a set of flat metallic sheets, some with black colour (so they were fully absorbing) while some others were almost fully reflecting, fixed on a light rod like in fig. 1. 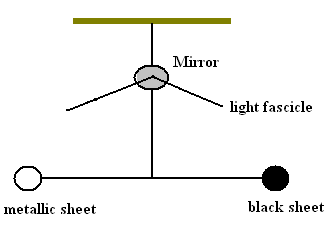 The system was put in a vacuum chamber.
As a result the pressure on the reflecting surfaces is twice that exerted on black surfaces, and this difference lead to a torque on the rod so that the hanging spring of the rod is twisted. Thus the twisting angle is directly related to light pressure.
The results obtained by Lebedev showed that the light pressure value agreed with Maxwell's theory.
Later, the pressure exerted by light was calculated using the relativity theory on basis of E=mc2, and the momentum is p=E/c.

The idea of experiment:
Original experiment was made using visible light. What’s happened if instead of light, microwaves are used?
On basis of special relativity, the energy of photons in visible and microwaves are: E = hν
With actual interpretation a visible photon has a frequency νv≈10exp15 and in microwave up to νm≈10exp13, consequently the source of radiation must be 100 times powerfully for microwave in order to get the same effect.

Up today the vacuum technique, microwave generation and the material science has made huge progress.
The experiment is designed to measure the pressure exerted by microwave on a similar device like the one used by Lebedev as in fig. 1.
A sheet is build from material with high microwave reflectivity coefficient (heavily doped polypyrrole films available described at
http://www3.interscience.wiley.com/journal/104033896/abstract?CRETRY=1&SRETRY=0), and the other sheet is from a material with a high absorbance coefficient (Microtubules of polyaniline as new microwave absorbent materials described at
http://www3.interscience.wiley.com/journal/88513004/abstract?CRETRY=1&SRETRY=0).
With this improvement and using a microwave source, similarly the pressure on the reflecting surfaces is twice that exerted on absorbing surfaces, and this difference should create a torque on the rod so that the hanging spring of the rod is twisted.
In practice, for microwave and terraherz u.e.m.  the rod is not twisted and the experiment is going to lead to a negative results.
The negative results are due to a specific propagation of electromagnetic waves and due to difference between electromagnetic waves and light.
Maxwell predicted that when electromagnetic waves hits an object and is reflected, the wave pushes on the electrons in the surface of the object, which in turn push on the rest of the object.
Is the explanation reliable?
Let’s consider that electromagnetic waves hit an electron, in the first semi period, when the electric field E increases, as in fig. 2. In this case the electron will be attracted toward the direction of increasing electric field. 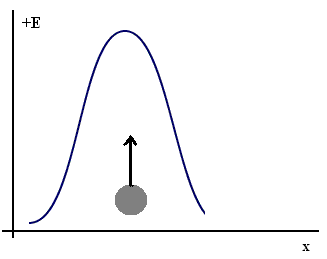 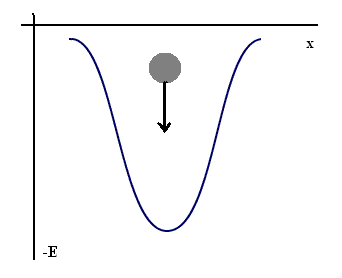 Because the change of electric field direction is made more then 10exp8 times per second the electron due to its inertia does not move at all.
Consequently an electromagnetic wave can’t produce a macroscopic pressure at absorption or reflection. The detailed interaction between electromagnetic waves and matter will be described in further study. For the proposed experiment, it is necessary to emphasize that in case of microwaves, the rod does not twist.
Another case is for light which has a corpuscular nature and photons leave their momentum at absorption or reflection.