Background and actual interpretation
According to actual interpretation, engines are devices that consume fuel (coal, gasoline, diesel, alcohol, etc. ) and converts heat into mechanical work.
The first steam engine was invented in ancient times by Heron of Alexandria. Much later, towards the end of the Middle Ages, rudimentary steam engines were invented by Denis Papin, Thomas Savery, Thomas Newcomen, etc. and mainly used for the removal of water from coal mines. Significant improvements in these primitive models were made by James Watt and the steam engine began to be used in a wide range of applications starting from spinning and weaving textiles up to rail or sea navigation. Practical development of the steam engine led to what history calls the industrial revolution.
For the first prototypes of steam engines, steam pressure is exerted on one end of the cylinder to move a piston. In the improved version, both ends of the piston are used to produce mechanical work, and therefore these motors are also known as double-acting.
We analyze in detail the working principle of a double-acting steam engine. The steam coming from a boiler is guided through a pipe to the inlet and enters the body of the motor C to the  left side of the mobile piston E.  The path of steam is featured with red for admission and blue for refulation. 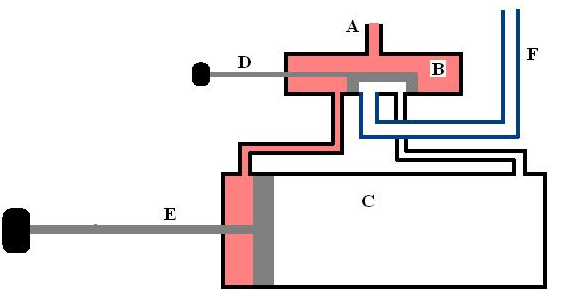 Figure 1
The steam pressure will exert a force on the mobile piston and therefore it will move it to the right ( Fig. 2) . 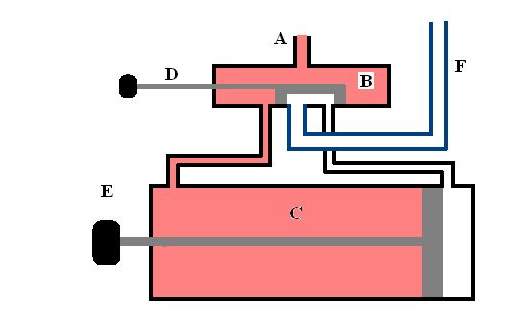 Figure 2
Valve D moves to the left (Fig. 3) and blocks the inlet of steam to the left part and in the same time open the way steam into the right chamber of the engine as far the piston has already moved to the right. At the same time the valve D connect the left chamber of the piston to the atmosphere through an exhaust port, resulting in an equilibrium of the pressures, excess water vapor in this way is transferred to the air producing a specific whistle. 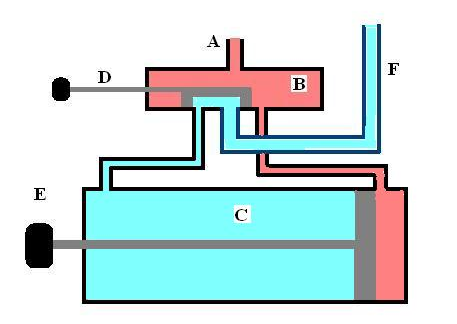 Figure 3
With the movement of the valve D, let free for steam pressure to get on the right side of the piston, and this movement will force the piston to get back to the left as in Fig . 4 . 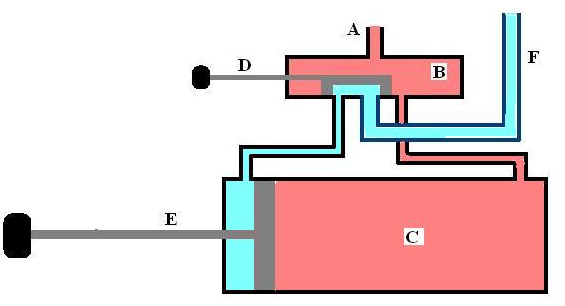 Figure 4
D valve changes position again and basically the situation in Figure 5 is almost identical to the original situation. The difference is that we have the right of the piston chamber filled with steam and this is now in contact with the atmosphere. As in the previous case, there is a pressure equilibration between the piston chamber and the atmosphere, with removal of excees pressure. 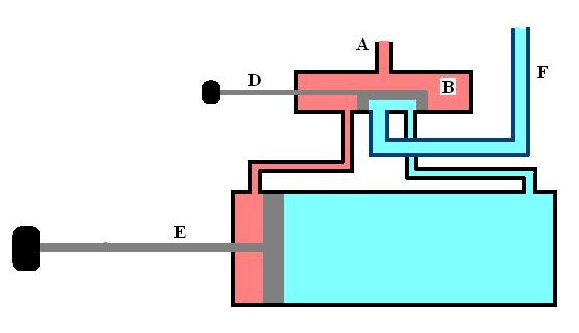 Figure 5
In this way the steam is admitted alternately to each end of the piston and the other end is automatically connected to the outlet channel and this come-and-go motion can then be converted into circular motion using a rod.
After a period of glory for more than a century, steam engines were generally abandoned in favor of internal combustion engines .

Consider a steam engine (one rcovered from a toy can be  used too but the pressure of gas must be changed), but instead of steam produced by the boiler, a pressurized gas cylinder is  connected to the inlet a ( fig. 12). Gas tank is in equilibrium with the surounded environment. It is completely irrelevant whether the experiment is performed at the Arctic Circle where we have an ambient temperature of -30 °C, or at the equator where the ambient temperature is +30 °C. For economic reasons we use a nitrogen tank which is provided with a pressure of at least 15 to 20 atm, but any other gas used will give the results.
Nitrogen under pressure coming from the tank enters the intake path that is left free in the left chamber of the piston (Fig. 12) and as far the piston has the possibility tomove, the gass pressure will force the piston to go to the right as in fig. 13. 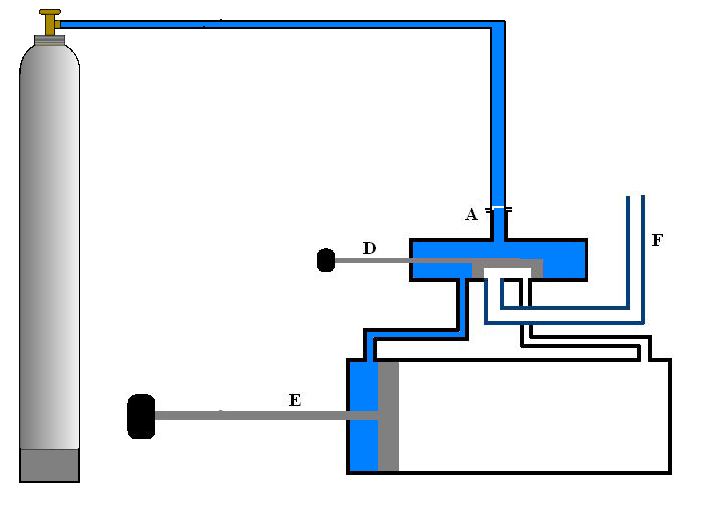 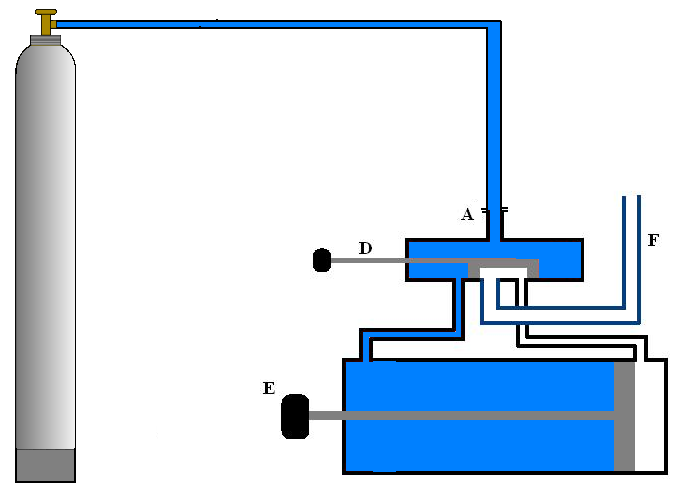 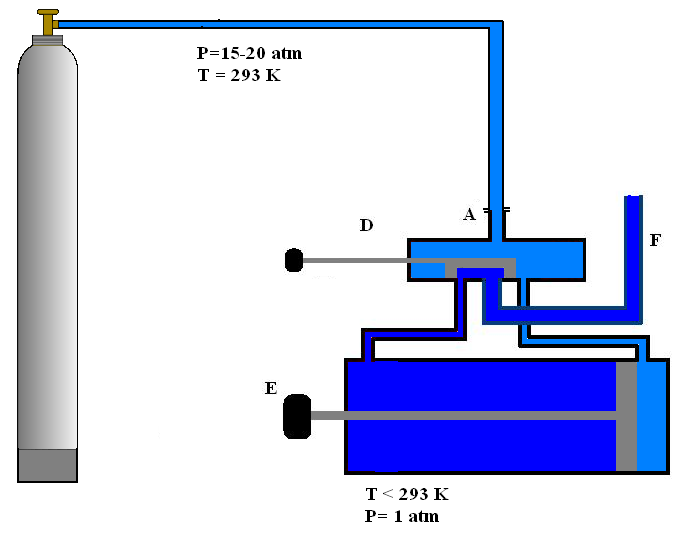 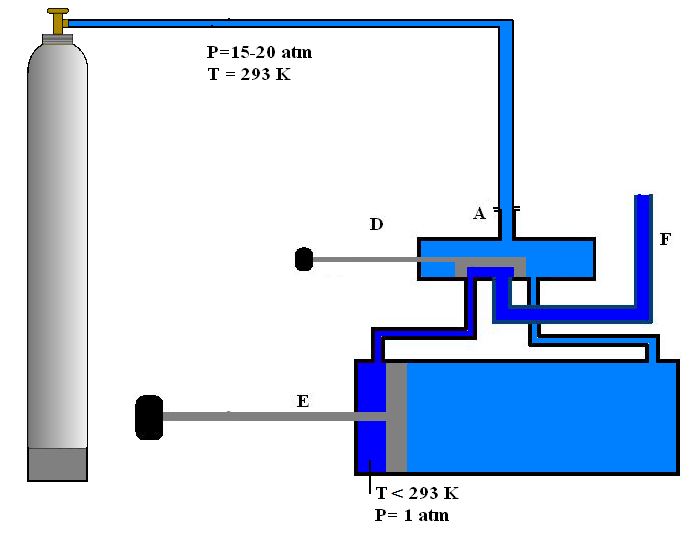 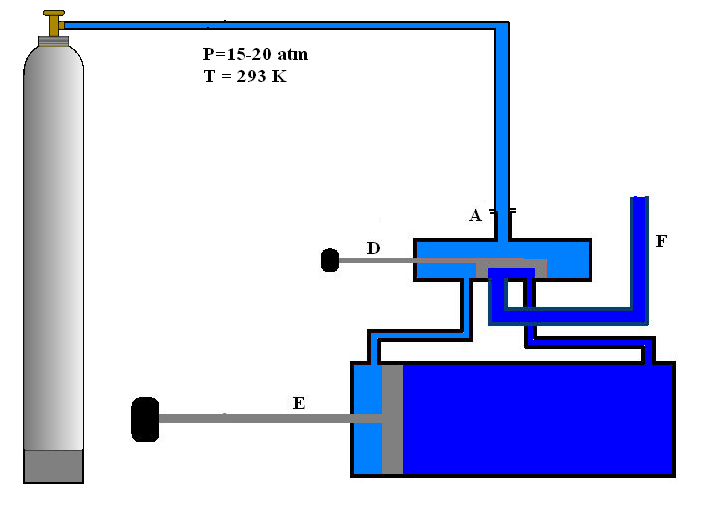 Figure 16
As can be seen, there is no difference in the operation of a steam engine when this is supplied with a gas under pressure at normal temperature or with a high temperature steam. If some structural adjustments are made, it can be obtained a higher yield in case of a pressured gas at normal temperature then a steam under pressure. Although the experiment is rudimentary and common, its consequences over current thermodynamic concepts are dramatic. To date thermodynamic principles are ruled out by this simple  experiment.
As it can be seen the engines are working based on pressure gradient and not on temperature gradient.
The formulation given by Planck for the second principle II: it is impossible to obtain mechanical work through a cyclical monothermal process is a nonsense. Without the need for two thermal sources an engine can work for an indefinite time and deliver enough mechanical work. This does not mean that expansion and compresion of gases in the engine are taking place without a heating or cooling even in case of pressured gas feeding the engine.
In the proposed theory, the present, ,,combustion engine” are working based on pressure gradient generated into engine. The secondary temperature gradient can in a indirect way increase the presure gradient into engine.