Can heat be transformed into mechanical work with a yield of 100 %?

I have asked a lot of research institutes to help me to perform this simple experiment. The cost of replication is about few thousands euro ... but it seems no one was interested...

It is accepted that in a monothermal cyclic process only work can be transformed into heat, but not vice versa. In order to obtain the conversion of heat into mechanical work, a machine is necessary to operate between two heat sources at different temperatures.
But how true are these statements of classical thermodynamics which have become more close to philosophy than experimental physics?
In principle, in a new theory of thermodynamics, heat itself cannot be transformed into mechanical work. But heat can generate a pressure gradient for a gas, and this pressure gradient can produce mechanical work. If you do not have a carrier gas, the amount of generated heat can be immens and the mechanical work would be infinitesimal.
Of course the following experiment get use of this ideea, namely the transformation of a solid to gas directly (sublimation) followed by a gas expansion which produce mechanical work.
Besides converting of heat into mechanical work with a theoretical yield of 100%, a single source of heat is used to the disperation of theoreticians.
The experiment is fairly simpleas construction, but a bit expensive and experimental technique that requires little adjustment tests.
Consider a mechanical piston as in Fig. 3, which is coated on the inside with a layer of solid carbon dioxide. Of course to have this case the entire system must be at a temperature of minus 80°C. In the device a mixture of fine charcoal and air is present, and this mixture can be triggered to burn by means of compression eventually combined with an electrical spark.
The first car engines were designed to use fine charcoal so ... there is no new theoretical approach for the experiment. 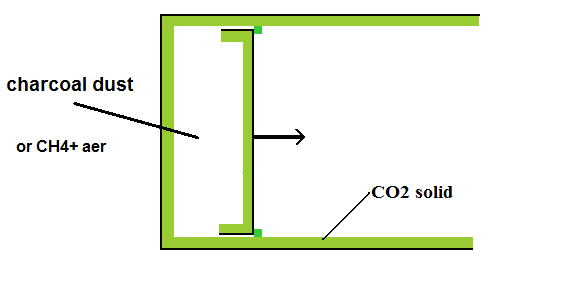 When the mixture is ignited, in the combustion process new CO2 gas is generated and of course a certain amount of heat evolve in the system. Combustion gases having high temperature will attempt to transfer that heat to the gases in the chamber, to the the piston and to the walls of the device. But in his attempt to transfer heat to the outside, these gases meet solid CO2 layer that will take all this thermal energy. At a temperature of -79 °C, the carbon dioxide sublimes, it means transforms directly from solid into gas. Therefore instead of heating the device and the piston, the heat of reaction generates a further volume of gas inside compartment with a yield close to 100 %.
Of course, the experimental arrangement is carefully chosen in order to correlate the thickness of solid CO2 on the walls with the quantity of heat released into the reaction. In practice it is necceary to be sure that heat evolving in reaction it is not enough to sublimate all the solid CO2 inside the chamber.
Following this massive sublimation of CO2 into the device, the pressure increases and the piston moves to the right as shown in Fig 2 . From the theoretical point of view, all heat released in the reaction can be transformed directly into the pressure gradient respectively mechanical work. 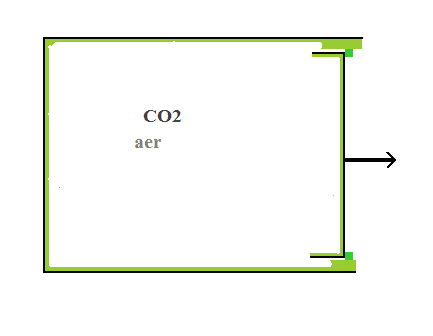 As long as within the system, the temperature will be higher than -79 ° C , sublimation of the CO2 molecules to continue and the pressure rise pushes the plunger to the right.
In practice, such a device would work with a yield greater than 95%, but the difference between experimental and theoretical value is caused by secondary factors and not by ,,principial” limitations. A theoretical model is an idealization of a situation, while in practice there are a lot of losses.
A supplementary condition necessary for the experiment: the pressure in the device cannot exceed 5 atm, in which case the carbon dioxide may melt before the sublimation.
This simple experiment rule out quite the entire accepted thermodynamic.

Solid CO2 engine
A simple application of this new theory of thermodynamics is the solid CO2 engine. Of course this engine in daily life will not find a wide applicability. Its advantages are that it uses only a source of fuel (solid CO2) without the need of oxygen for combustion and at the same time does not require a high temperature to operate. The engine has to be at a temperature higher then -79C, and in this case the surrounding acts like a ,,warm source”.
But maybe, such an engine would find applications in space missions or special circumstances on the ground.
Operation of such an engine would be based on the three steps as shown in the table below:

Step 1 Feeding. The solid fuel (CO2 ) is introduced into the cylinder in the form of flakes and the intake manifold is close as shown in figure, when the piston is at superior dead point.

Time II: Expansion
As far the cylinder and the piston are at a temperature greater than -78 °C, in terestrial condition at 22°C, a sublimation of the CO2 takes place, and the gas pushes the piston to the inferior dead point as shown in Figure.

Time III : Disposal. The piston has reached the lower end of the cylinder. The outlet valve opens discharging carbon dioxide gas through it. The piston due to its inertia continue to move toward top ...
The cycle is repeated

In the ground conditions, the engine may operate on the basis of the atmospheric temperature even at the poles.