If you want to repeat the experiment take the precautions necessary (very high Voltage, use gloves, etc)!!!!!!

For the experiment we have to extract the electron beam which usually is directed toward the fluorescent screen of a cathode tube.
In a TV or PC monitor tube the electrons flow in the direction indicated in fig. 1. Cathode emits electrons, which are accelerated by multiple anodes. Electrons hit the phosphorescent screen and a spot of light appear and after that they are recovered in a secondary step. 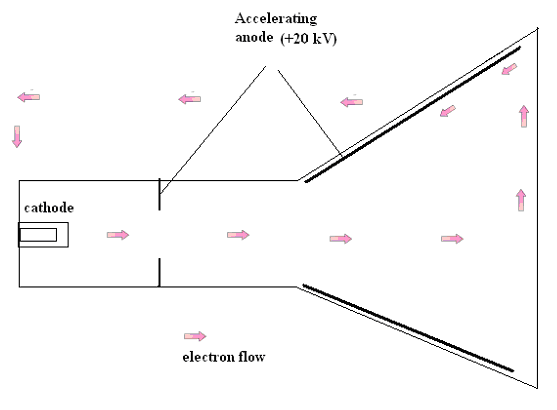 Figure 1. Electron circuit in a CRT

For the proposed experiment is necessary to modify a little bit the flow of electrons as indicate in fig 2. In order to obtain this modified electron flow, the high potential cable mounted on the neck of tube is removed and this potential is connected to a foil of aluminum; the aluminum foil is then fixed on the external part of the screen (fig. 2). The experiment works fine even without this foil and proceeding further as indicated below. 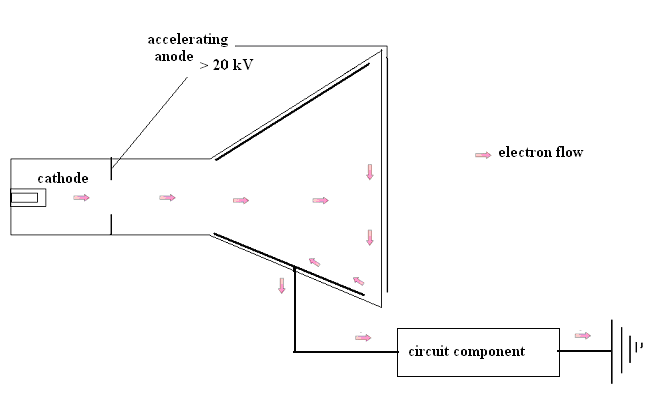 At the connection point situated on the neck of tube, are inserted the components of the circuit used in proposed experiment. The other connection of this circuit is to a null point ( Earth potential from a heating pipe or another null point). In this way, the electrons accelerated into the CRT are forced to flow through the external circuit.
The cut off experiments focus on some simple effects of this beam of electrons when pass through external circuit:

This is the most simple experiment imagined and consist in ,,measuring” the intensity of electric current with different type of ammeters.
The analog ammeter is based on magnetic deflection, more precisely, a current passing through a coil causes the coil to move in a magnetic field. The electronic ammeter uses some bridges to measure the How deos a electronic ammeter works?
Having in mind the size of an electric current produced by a CRTsome digital and analog micro ammeters are necessary. I have used three analog micro ammeters: one made by Weston Electric (0-50 µA), a second one  W136A test meter (0-25 µA) made by Honeywell and a third one made by Sunwa electronics. As digital micro ammeter I have used a Fluke 116 and a METEX M3800.
All these instruments were tested before use making a lemon battery (see internet) and measuring produced intensity of electric current; all instruments work fine and there are no statistical differences between their indications. As general information, depending on the aria and depth of Zn and Cu electrode immersed into lemon, the produced current can vary between 10 micro amperes up to 125 microamperes.
In order to measure the intensity of electric current produced by an electron flow generated by a CRT, a circuit presented in fig 3 is used. 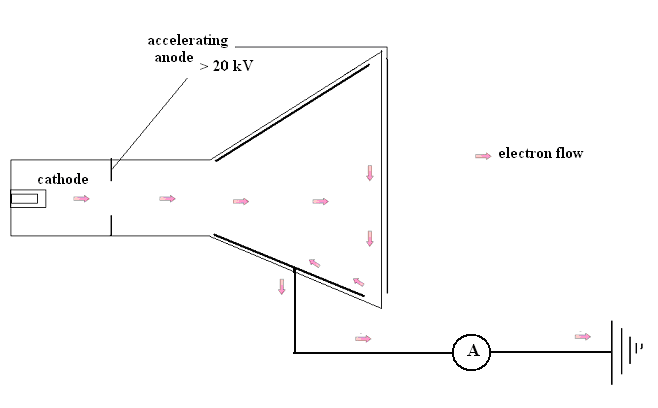 Figure 3. Current measurement for a CRT

With an analog micro ammeter connected into circuit there is no indication of an electric current passing through circuit. And the result was consistent for all 3 analog micro ammeters.
There is no magnetic effect of a charge displacement, in contradiction with actual electromagnetism, or this effect is at least an order of magnitude smaller then predicted by actual theory.
When a digital ammeter is introduced into circuit, an electric current is displayed on the screen. But are the indications of the digital ammeter reliable?
As example using M3800 micro ammeter, on the scale of 20 µA, a current of 11 µA,  is measured. But the same instrument, on the scale of 200 µA, for the same CRT, at the same time, a current of 60 µA is indicated.
I was thinking in a false calibration of micro ammeter. So I have checked the instrument again, and supplementary I have bought other digital micro ammeters. The conclusions are the same. A charge displacement is inconsistent with the ,,calibrated scale” for a current measurement.
Be careful and not leave an electronic instrument with a beam of electrons passing through it for a long time because it will break it!!!!

Supplementary, when both digital micro ammeters are used on the alternate micro ampere scale, a detection of an alternate current as result of charge displacement is counted. For CRT tube the alternate current measured was 24 µA.
To summaries a comparison between a beam of electrons and a chemical source of electricity is presented in tab. 1.

It is completely inexplicable in the frame of actual electromagnetism how the same CRT source does not produce a magnetic effect around a conductor and give a positive response on both DC and alternate scale of a digital ammeter.
Actual theoreticians should explain what a charge displacement in reality is and how it can be included in a physics theory.
For proposed theory a charge displacement has nothing to do with an electric current.

The same sources are tested for observing another effect of electrolysis, more precisely, gas release. It is well known that as result of electrode reaction, depending on the electrolytic cell composition, gases are released at one or both electrodes.
In our experiment acidulate (H2SO4) water solution is used in electrolytic cell. The water electrolysis was used in order to have a comparison between volume of gas released at anode and cathode. As far the volume of gas released is small and the time of experiment is long, I have used this chemical process in order to avoid a bias due to a possible gas release coming from the existent gas dissolved in solution. In case of another cell composition, when gas is released only at one electrode there are necessary some preliminary steps (degassing), and at more careful interpretation.
Having in mind the size of supposed ,,current” produced by a CRT, and consequently the volume of gas released at electrodes, some adjustments are necessary for a successful experiment.
The electrodes, made by platinum metal are gloved in two pipettes parts and sealed in flame. As is observed (fig.10 bis) around electrodes a space with a volume of about 0,1 ml is formed. Before experiment starting, using micropipettes these chambers are filled with acidulated water coming from electrolytic cell. These filled electrodes are introduced in an electrolytic cell with care in order to avoid a gas intrusion into electrode chamber. If a process of electrolysis takes place, the released gas will go up in the chamber and will push the liquid down. In order to be more evident this fluid displacement, in water a small quantity of colorant or a chemical indicator is added (in our example rot phenol).
The accumulation of gas is cumulative for long time (the chamber is well sealed), even the current will be on micro ampere size.
For the CRT source, a circuit similar to that presented in fig 5., is used.
In order to have a clear result, the experiment longs 10 days and was repeated 4 times with 2 different CRT tubes (one color and another black and white).
After 10 days, no gas is released, for an electron charge displacement, at both electrodes, even the digital ammeter indicated 17,4 microA for color CRT and 11,1 micro A for black and white CRT. 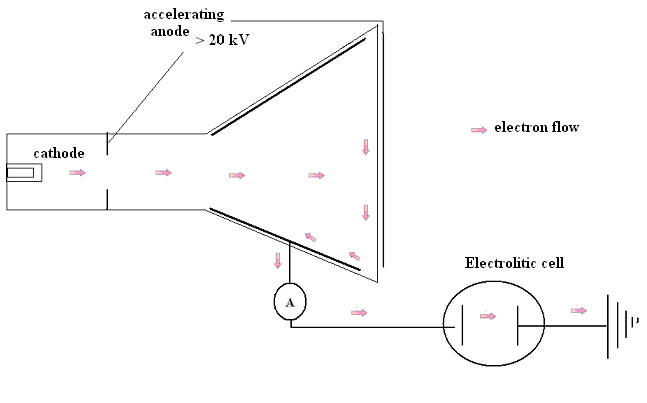 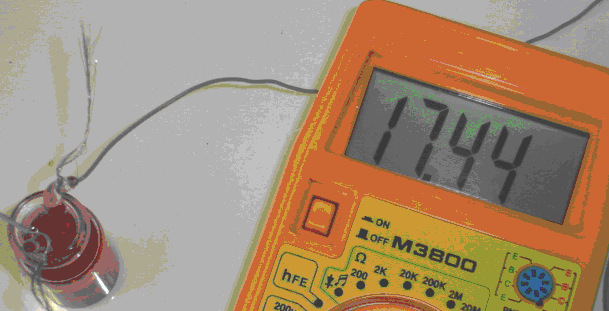 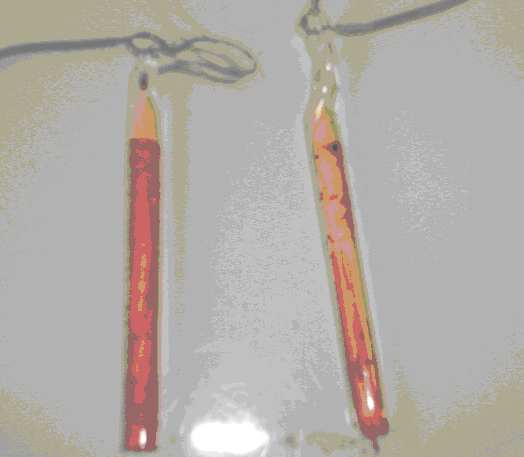 By comparison two chemical batteries (1,5V) connected in series for 5 minutes, gave a current of 0,89 mA and in electrodes chamber both hydrogen and oxygen are produced as in fig. 4. 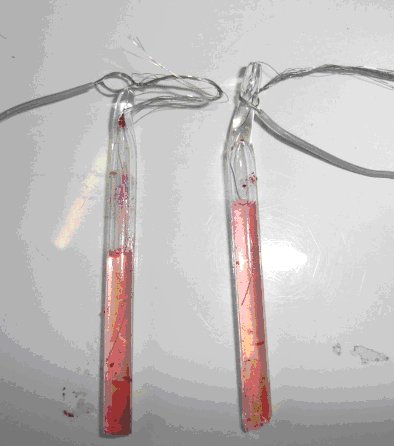 As is observed, at one electrode a double volume (hydrogen) is released, in comparison with the other electrode (oxygen).

The gas release is due to the chemical processes at electrodes followed by molecular hydrogen and oxygen generation.

How is possible this?  A smaller charge of about 2,4 C in case of two batteries produce a greater effect (visual and chemical) then a greater charge (15,1 respectively 9,5 C) in case of CRT ?

I leave to actual theoreticians the explanation for this simple experiment in the frame of actual physics.In proposed theory a charge movement does not represent an electric current.

The same sources are tested for detection of pH modification as result of an electric current passing through salt solutions. For the CRT, the scheme of the circuit is presented in fig. 5

Having in mind the inconsistency of current measurement for a CRT, the smallest value indicated by digital ammeters was taken into consideration (17 µA for color CRT and 11µA for the other ).
The circuit from fig. 5 is leaved to work for 10 hours. For the experiment a small electrolytic cell (fig. 7) with a volume of approx 15 ml, filled with with NaCl solution was used. As indicator a small quantity of bromthymol blue is added.  During this period of 10 hours of continuous working, no change of color is observed at electrodes. The experiment was repeated 4 times with the same result – no change of color at electrodes even after one day of continuous electrons flowing through the electrolytic cell.

In order to have a comparison effect, a simple circuit formed by two alkaline batteries of 1,5 V, an ammeter and a electrolysis cell with the same concentration of NaCl is made. The current measured in experiment was 0,89 mA. The visual effect after 25 seconds of electric current flowing is presented in fig. 8. The change of color at one electrode is due to the NaOH formation.

I will start with second experiment because there is a positive result.

In a time of 90 s and with an intensity of 0,89  mA, through circuit passes a charge equal with:

As is observed, a charge less then 0.1 C is more then enough to observe the effects of an electric current.

By comparison, in the first experiments with CRT electron source the total charge is:

Of course someone my consider the experiment take too long and a diffusion of molecules happen in entire volume of fluid and the released NaOh is not enough to color the solution.

Therefore I feed the electrolytic cell with the two CRT electrons beams  and in this case I have a current of 28 microA, and the time for the instrument was set for an hour. The result was the same ….. no chemical effect observed.

In this time the quantity of electricity through solution was:

I leave to actual theoreticians the explanation for this simple experiment in the frame of actual physics.

In proposed theory a charge movement does not represent an electric current.