Can a covalent or metallic compound substitute a salt bridge in a battery?

The original experiment was made using graphite as covalent compound due to its availability and inert character toward a large category of chemicals. Modern replication with same results, were made using a strip of platinum or gold as ,,salt bridge”. Other combinations are possible, but you have to choose the bridge composition, in such way, to be chemically inert toward electrolyte.

For the purpose of this experiment, a simple home made battery is made as in fig. 1. The ,,positive” electrode is formed by a Cu piece inserted into a glass of water. The,,negative” electrode is formed by a Zn piece inserted into water or into an acid solution (vinegar,  citric or sulfuric acid). Vinegar and citric acid are commonly used in food preparation so it is not a big deal to find them. For a more spectacular visual effect, a solution of sulfuric acid, 3 up to 5M can be used in Zn electrode chamber.
Common tap water can be used. Of course for more elaborated experiments or for the skeptics deionised water is necessary; for home experiments this can be bought from a car shop.
As salt bridge, a covalent compound (graphite) is used. It is possible to arrange a geometrical form in a U shape only from graphite components, or to use two pieces of graphite connected with a metallic conductor. For the simplest setup, two graphite electrodes recovered from used batteries are used. Two graphite pieces recovered from a pen are another available option. 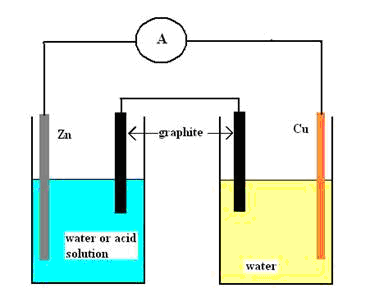 With this set up, an electric current of about 30μA is counted on the ammeter – fig. 2, when in the Zn electrode chamber, water is used. After long time of working, the Zn electrode is consumed, and at Cu electrode no visual modifications are observed. 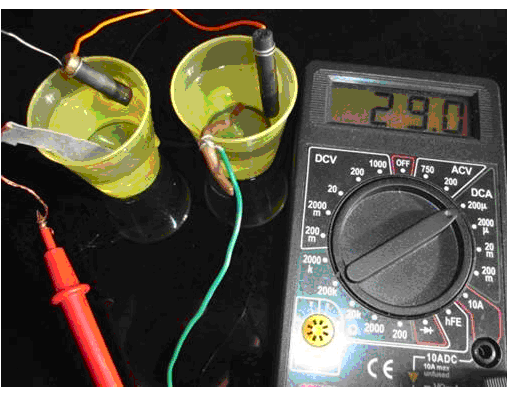 An electric current of about 50μA is counted on the ammeter – fig. 3, when in the Zn electrode chamber, vinegar is used as electrolyte. After shorter time of working, the Zn electrode is consumed, and at Cu electrode no visual modifications are observed. Bubbles of hydrogen develop on Zn electrode. 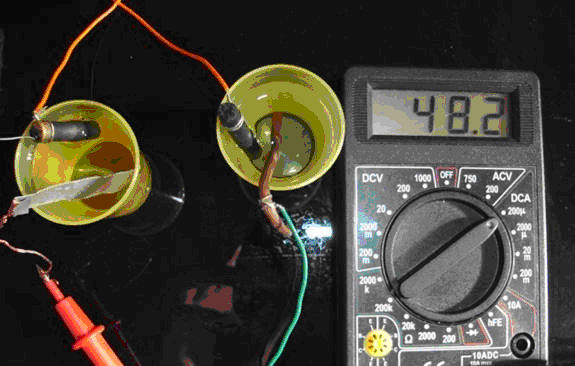 Figure 3 Variant of home made battery

An electric current from 50μA up to 5mA is counted on the ammeter, when in the Zn electrode chamber, a sulfuric acid on growing concentration is used as electrolyte.
When sulfuric acid is used, at Zn electrode it can be clearly observed the release of hydrogen gas simultaneously with rapid Zn electrode consume (fig. 4). Formed ZnSO4 gives opalescence in the compartment and starts to sediment when quantity produced is greater then its solubility.  At Cu electrode no visual effects are observed.

Fig. 4 Consume of Zn electrode in  sulfuric acid (null current when no contact between Zn and solution exists)

Hundreds of years ago, first successes were counted in electricity as result of galvanic elements and electrolysis explanation.
For a battery to work, both an oxidation and a reduction must happen; one generates electrons at one electrode, and the other uses them up at the other electrode. Each of these is called a "half reaction". If the electrodes are connected outside the cell by a circuit, electrons flow through it and the full reaction is completed.
As is presented in any low level science book, when a salt bridge is used for the construction of an electrochemical cell, the bridge – fig. 5, is actively involved in chemical processes taking place at electrodes. 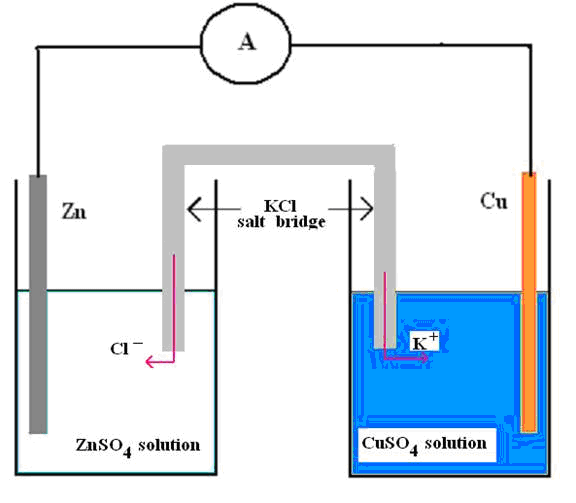 At beginning, each solution is neutral, with the number of positive charges balance the negative ones, but, as a consequence of the electron processes at the electrodes, ions will inevitably be produced or destroyed, or else their charges will be changed. This means that the solutions in the ,,anode” and ,,cathode” compartments will no longer be electrically neutral. In order to maintain solution neutrality, ions must be transferred from between compartments. This can be accomplished most conveniently using a salt bridge, which often contains a saturated solution of potassium nitrate or potassium chloride, KCl. Whilst the cells are being “discharged”, ions are continually moving from salt bridge to both compartment in order to maintain solution neutrality. Without a salt bridge the process would stop almost as soon as it started.

Now, at the negative electrode:

i.e. Zn2+(aq) are being formed, and these will immediately out-balance the SO42–ions in solution and cause it to become increasingly positive.
Conversely at the positive electrode:

As can be observed, the salt bridge completes the electrical circuit by connecting the two half cells with ions as the charge carriers.

The actual orthodox interpretation is absurd and denies the experimental reality. As can be observed in this simple battery, both,,oxidation” and ,,reduction” phenomena take place at the same electrode (Zn electrode), and, in the same time, a electric current is counted in external circuit.
Secondary, a non ionic salt bridge is used so again, the absurdity of ions movement as explanation for a current in the external circuit does not need any comment.
The proposed explanation will be formulated in detail in the book based on a new definition for the electric current.
In the new definition an electric current has nothing to do with a charge movement.
The framework for the conversion of chemical energy in electric energy is completely changed.