A simple circuit like in fig 1 is built up using some commercial batteries, an ammeter and an electrolytic cell.  The experiment performs fine with a single battery, but in case more batteries are used, the arrangement must be in parallel in order to have a potential lower then 1.7 V avoiding water electrolysis. 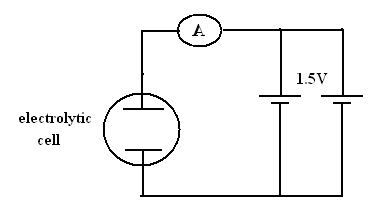 Fig. I Experiment detail
At beginning pure water (distilled or better deionised water) is poured into the electrolytic cell and the electric current in circuit is measured. As far pure water is a poor electric conductor, the experiment starts with a zero intensity indication on the common ammeter scale (there is a small current which can be detected switching the ammeter on micro domain, but this current is irrelevant for the experiment).
Now a quantity of few grams of reagent grade NaCl is added to the electrolytic cell. Without any agitation, without changing the position of electrodes, an electric current appears in circuit and after about one minute the value indicated is about 9 mA. Of course the value of this current is dependent on a large categories of factors like distance between electrodes, quantity of salt added, geometry of electrodes and cell, agitation, source power, etc. In other repetitions and using more batteries in parallel the current can arrive to 500 mA.
This current can run an indefinite time through circuit if we provide a stabilized source of current; with a common battery, electric current is going to decrease slowly in time (usually hours)  because the battery gets exhausted.
What? Did my instrument really indicate such value?  How is this possible? Why do we have an electric current into circuit?
The experiment can be replicated home using tap water and some graphite electrodes recovered from a pen or a used battery and anyone can see the results. In case of tap water you will start with a positive value for background current (usually less then 1 mA) and adding salt the current will boost in the circuit….
The measured value of electric current will be different and depend on the distance between electrodes, number of batteries connected in parallel, the geometry of electrolytic cell and electrodes.

It is accepted that salt solution permits to electric current to pass through, and this is due to the ions which travel toward electrodes and chemical reactions take place at electrode-solution interface. But what’s happened if the ions have not the possibility to react at electrodes and to change the electrons? From electrochemistry we know that for water electrolysis are necessary more then 1.7 Volts, and for NaCl electrolysis approx. 4 Volts. In our last experiment the voltage is lower than value necessary for electrode reactions and for electron transfer. In this case according to actual physics the ions must migrate to electrodes and at beginning the intensity must be great due to the movement of charges in solution; in short time,  charged regions are formed around electrodes (fig 6.) and intensity of electric current must decrease like in fig 7, admitting a constant velocity of ions in solution. After a short time interval the intensity of electric current must became zero and the solution transforms in a capacitor in this conditions. 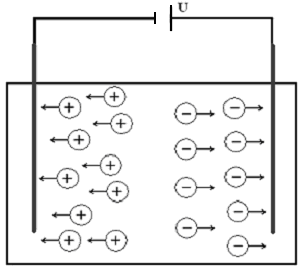 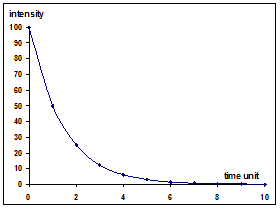 The reality is opposite; the current passes through solution a whole night at the same intensity the same intensity when a stabilized source of current was used. Of course there was a consume of electricity in this process. The power dissipated during the night was more then necessary to consume all the liquid in cell, but no volume modification is observed.

Proposed explanation starts from different concepts for electric currents. In this case an electric current can pass through a circuit without chemical effects. Of course some electric power is consumed in the circuit, even in absence of chemical reactions. The electricity needs to change its grounds and laws of electrolysis need some theoretical and practical adjustments too. The science will never be the same when such experiment will be widespread….because no common sense mind will ever accept the science fiction written in technical books. Or maybe I am wrong…who knows?!