Covalent bonds are formed as a result of the sharing of one or more electrons. In classical covalent bond, each atom donates half of the electrons to be shared. According to actual theories, this sharing of electrons is as a result of the electronegativity (electron attracting ability) of the bonded atoms. As long as the electronegativity difference is no greater than 1,7 the atoms can only share the bonding electrons.
Being in impossibility to explain coordinative complex and also the structure of a lot of common compounds, new variants of covalent bound theory are proposed. In the Valence Bond (VB) theory – one of must representative in quantum mechanic - an atom rearranges its atomic orbital prior to the bond formation. The equation that serves as a mathematical model for electrons movement inside atoms is known as the Schrodinger equation:

where: m is the mass of the electron, E is its total energy, V is its potential energy, and h is Planck’s constant. The solution of Schrodinger equation, which gives the electron density distribution are called orbital.
The simplest types of orbital s and p are presented in fig. 1.

The s orbital has a spherical symmetry and p orbital has a bilobar form with a node in the middle.
In the simplest case, a covalent bound should be formed by superposition of two atomic orbital as in fig. 2

Instead of using the atomic orbital directly, mixtures of them (hybrids) are formed. This mixing process is termed hybridization and as result are obtained spatially-directed hybrid orbital.
We will describe a simple hybridization for s and p orbital. In this case we can have three basic types of hybridization: sp3, sp2 and sp. These terms specifically refer to the hybridization of the atom and indicate the number of p orbital used to form hybrids.
In sp3 hybridization all three p orbital are mixed with the s orbital to generate four new hybrids (all will form σ type bonds or hold lone electron pairs). 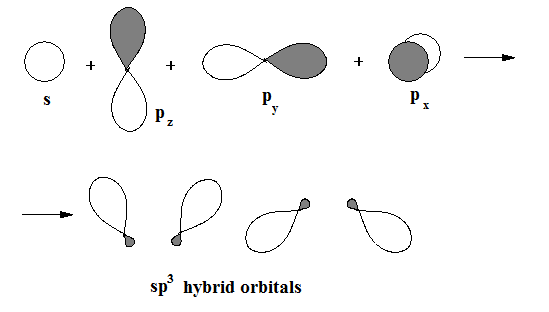 If two p orbital are utilized in making hybrids with the s orbital, we get three new hybrid orbital that will form σ type bonds (or hold lone electron pairs), and the "unused" p may participate in π type bonding. We call such arrangement sp2 hybridization.
If only one p orbital is mixed with the s orbital, in sp hybridization, we produce two hybrids that will participate in σ type bonding (or hold a lone electron pair). In this case, the remaining two p orbital may be a part of two perpendicular π systems.

An atom will adjust its hybridization in such a way as to form the strongest possible bonds and keep all its bonding and lone-pair electrons in as low-energy hybrids as possible, and as far from each other as possible (to minimize electron-electron repulsions).
In the simplest example hydrogen molecule formation:

Hydrogen atoms need two electrons in their outer level to reach the noble gas structure of helium. The covalent bond, formed by sharing one electron from every hydrogen atom, holds the two atoms together because the pair of electrons is attracted to both nuclei.
In order to explain the form of a molecules quantum mechanic propose a new theory called ,,electron pair repulsion theory”. According to this, the shape of a molecule or ion is governed by the arrangement of the electron pairs on the last shell around the central atom; this arrangement is made in such manner to produce the minimum amount of repulsion between them.
In case of two pairs of electrons (like BeCl2) around central atom the molecule is linear because an angle of 180º insure a minimum interaction between electrons pairs.

In case of three electron pairs around the central atom (BF3 or BCl3) the molecules adopt a trigonal planar shape with a bond angle of 120º:

In case of four electron pairs around the central atom (CH4) we have a tetrahedral arrangement. A tetrahedron is a regular triangularly-based pyramid. The carbon atom would be at the centre and hydrogen at the four corners. All the bond angles are 109.5°.

For five pairs around central atom (PF5), the shape is a trigonal bipyramid. Three of the fluorine are in a plane at 120° to each other; the other two are at right angles to this plane. The trigonal bipyramid therefore has two different bond angles - 120° and 90°.

In case of six electron pairs around the central atom (SF6) the structure is an octahedral.

The properties of the molecule are described by the sum of the contributions of all orbitals having electrons.
In localized bonding the number of atomic orbitals that overlap is two (each containing one electron), so that two molecular orbitals are generated. One of these, called a bonding orbital, has a lower energy than the original atomic orbital, and the other, called an antibonding orbital, has a higher energy. As orbital of lower energy fill first, in case of one electron sharing between atoms, both electrons go into the new molecular bonding orbital, since any orbital can hold two electrons. In this case the antibonding orbital remains empty in the ground state.
Let’s consider the simplest molecule - H2. Each H atom has an electron in a 1s orbital. When they come together, these two 1s orbitals overlap as in fig. 4 and form the bound orbital.
In the same time a higher electron density between atoms is counted.
The other anti-bonding orbital is empty and has a shape that would lead to electrons spending more time away from the region between the two atoms. Because of this, this orbital is considered an. 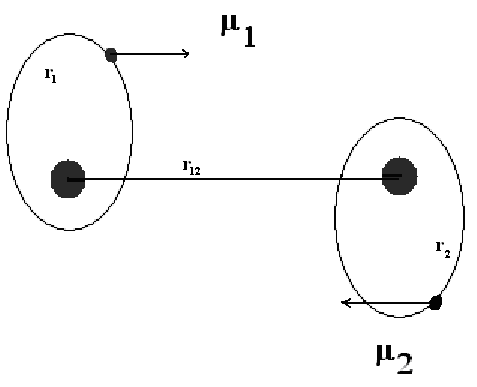 The hydrogen molecules formed due to the opposite orientation of electrons magnetic moments has a lower energy comparative with the state of single atoms of hydrogen. The energy interaction between hydrogen atoms is given by:

(1.3)
where: B is the strength of the field;
r is the distance from the center
λ is the magnetic latitude (90°-θ) where θ = magnetic colatitudes, measured in radians or degrees from the dipole axis (Magnetic colatitudes is 0 along the dipole's axis and 90° in the plane perpendicular to its axis.);
M is the dipole moment, measured in ampere square-meters, which equals joules per tesla;
μ0 is the permeability of free space, measured in henrys per meter.
For our case, l= 0, M = m, so the field created by first electron at second electron level is 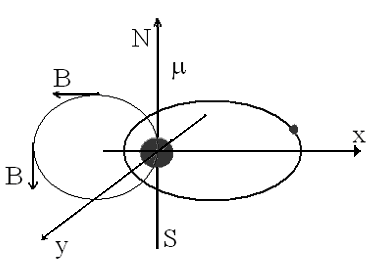 And for second electron at first electron orbit we have:

(1.6)
where and and μ0 is the permeability of free space, measured in henrys per meter.
For hydrogen electrons due to the symmetry of atom arrangement we have as equal value for electron magnetic moments, so we can write:

(3.7)
The major and fundamental difference between quantum theory and proposed theory is that after forming of hydrogen molecules, every atom of hydrogen has only one electron around nucleus. The hydrogen atom doesn’t have a doublet structure according to new theory. There is no difference in atomic structure between atom of alone hydrogen atom and hydrogen atom in molecule. The only difference is the coupling of magnetic moment of hydrogen with another magnetic moment and this coupling insure a lower energy in case of molecule.
As comparison, quantum mechanic is incapable to explain why two opposite spin are lowering the energy of system. In the same time there is a contradiction in actual theory when the electrons are filled on subshell in atomic structure and when a covalent bound is formed. More precisely, the electrons fill a subshell first with one electron in every orbital with parallel spins and after that the existing electrons complete the orbital occupation with opposite electron spin. So if the coupled spin state is more stable, at occupation of subshell should be occupied complete an orbital and after hat another orbital.
For other elements, when we have a single electron in the last shell the situation is simple because for the inner shells, magnetic moments suffer an internal compensation. What’s happened when we have more electrons on the last shell?